Bohrium (formerly: " Eka -Rhenium") is an exclusively artificially produced chemical element with the element symbol Bh and the atomic number 107 and is one of the transactinoids ( 7th period , d-block). In the periodic table of the elements it is in the 7th  IUPAC group , the manganese group . All Bohrium isotopes are radioactive. It was named after the Danish physicist Niels Bohr (not to be confused with boron ). 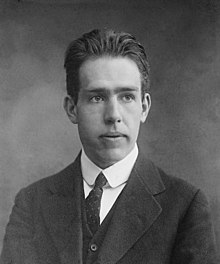 Bohrium was first produced on October 6, 1976 by a Soviet research group headed by Yuri Oganessian at the Institute for Nuclear Research near Dubna , but it was not recognized as such. The production therefore officially goes back to the Society for Heavy Ion Research in Darmstadt, which produced the element on March 27, 1981 and suggested the name Nielsbohrium. It was initially called Unnilseptium (symbol Us) and has been given its current name since the IUPAC recommended it in 1994 . It is also known as Eka - Rhenium .

There is no classification according to the CLP regulation or other regulations. Only a few atoms of this element can be produced at the same time and thus far too few for chemical or physical danger.