Dubnium (formerly also: Hahnium , Nielsbohrium ) is an exclusively artificially produced chemical element with the element symbol Db and the atomic number 105. It is one of the transactinoids . In the periodic table of the elements it is in the 5th  IUPAC group , the vanadium group . All Dubnium isotopes are radioactive . 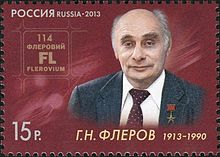 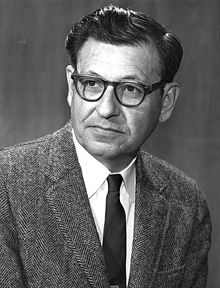 Albert Ghiorso, discoverer of Dubnium in 1970

Dubnium was discovered in 1967 by Georgi N. Flerow et al. at the United Institute for Nuclear Research at Dubna near Moscow and in 1970 by Albert Ghiorso et al. at the University of California , Berkeley . Like all transactinoids , Dubnium is artificially produced exclusively by particle bombardment. The Soviet working group worked with the bombardment of americium by neon cores and suggested the name Nielsbohrium for it:

The American team, on the other hand, shot at Californium or Berkelium with nitrogen or oxygen nuclei and gave the resulting element the name Hahnium :

After an element naming controversy , it was named after the Russian nuclear research center Dubna in 1997 . Other names that were used at times for this element were:

So far, the element has only been synthesized in very small quantities for research purposes (in the experiments of Albert Ghiorso et al., For example, about 6 atoms per hour were produced) and has so far not been of any significance.