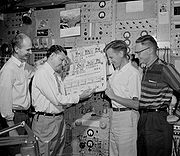 Albert Ghiorso (2nd from left) completing the periodic table after the discovery of the Lawrencium (1961).

Ghiorso earned a Bachelor of Science degree in electrical engineering in 1937 and was involved in the construction of Geiger counters. Because of these activities, he was appointed to the Manhattan Project team and later worked in Glenn Seaborg's group on research into transuranic elements (atomic number greater than 92).

Ghiorso was - among others - involved in the discovery of the transuranic elements with ordinal numbers 95 to 106:

In his honor the element 118, Oganesson , Ghiorsium should be named. After it became known that a colleague had allegedly falsified the measurement data on which the discovery was based, the proposed name had to be withdrawn.