This article covers the city in California, other Berkeley meanings under Berkeley (disambiguation) .

Berkeley [ ˈbɝːklɪ ] is a US city ​​in Alameda County in Northern California's San Francisco Bay Area . It borders the city of Oakland to the south, the Berkeley Hills to the east and the city of Albany to the north . Berkeley has a population of 121,643 (2018).

The area now Berkeley was by the Ohlone - Indians inhabited. Holes were found in rock formations that they had used to grind acorns . Additional artifacts were found during the renovation of a commercial building in the city center in the 1950s . In 1776 the first Europeans arrived with an expedition led by Juan Bautista de Anza . The expedition led to the establishment of the Presidio of San Francisco at the entrance to the San Francisco Bay .

The city is named after the Irish- born philosopher George Berkeley . According to records from the University of California at Berkeley , a group of students from the College of California watched two ships sail through the Golden Gate into the Pacific . One of the students, Frederick Billings, was reminded of the lines from Bishop Berkeley Westward the course of empire takes its way and suggested that the city be named after the famous philosopher to name.

During the 1960s and 1970s, students on the University of California campus organized a national protest movement against American involvement in the Vietnam War (1959–1975), so for many the city became a symbol of dissenting people. At this time Berkeley was also noticed by music enthusiasts all over the world, because the band Creedence Clearwater Revival came from there.

Berkeley is a major center of nuclear physics . Numerous transuranic elements were produced here for the first time in particle accelerators . For this reason, the element with the ordinal number 97 was named after Berkeley ( Berkelium ). In 1986 the urban area was declared a nuclear weapons-free zone in order to prevent research into nuclear weapons . 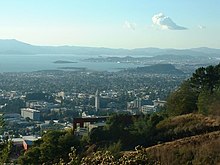 Berkeley as seen from Claremont Canyon

The city ​​of Berkeley's economy is largely medium-sized . The only exception, the University of California, Berkeley and the attracted by them large corporations such as Bayer and Emperor . The service sector occupies a dominant position, with numerous companies of the pharmaceutical industry and the metalworking industry to the economy is important.

After UC Berkeley, the most important employers in the city are the Ernest Orlando Lawrence Berkeley National Laboratory with 3832 employees, the Alta Bates Hospital with 2065 employees, the city of Berkeley with 1569 employees, the Berkeley school board with 1200 employees and Bayer AG 1101 employees. About 70,000 people work in the city and in 1999 the unemployment rate was 2.3%. A major problem for the economic development in Berkeley is the sharp rise in rental prices since the boom in the mid-1990s .

There are a total of four high schools in Berkeley , three of which are private schools , and there are numerous elementary and middle schools .

Besides the numerous libraries of the universities of the population is a public library. The Berkeley City Public Library collection contains approximately 380,000 books, 25,000 audio, and 8,000 video materials. In addition to the central office, the city library also has five other branches that are spread across the city.

There are numerous museums in Berkeley . Some of the most famous include the Berkeley Art Museum & Pacific Film Archive and the Lawrence Hall of Science , both of which are located on the UC Berkeley campus.

Berkeley is a popular water sports center with its marina . The rose garden, the botanical garden and the art museum of the university are worth seeing .