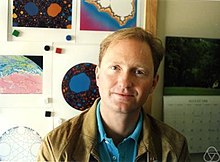 Curtis Tracy McMullen (born May 21, 1958 in Berkeley , California ) is Professor of Mathematics at Harvard University . He won the Fields Medal in 1998 for his work, particularly in the fields of differential geometry and complex dynamics , an area popularized by the Mandelbrot crowd and Julia crowd .

He studied at Williams College , where he obtained his bachelor's degree summa cum laude in 1980 , and then for a year at Cambridge University (Emmanuel College), where he was best in the second part of the Tripos exams. From 1981 he was at Harvard University , where he studied with David Mumford . In 1985 he did his doctorate there with the topologist Dennis Sullivan , who was not at Harvard himself, but with whom he previously worked at IHES on the advice of Mumford (1984, as Sloan Research Fellow ). There he also met Stephen Smale , who provided him with his actual doctoral topic ( Families of rational maps and iterative root finding algorithms ), in which he established the existence (for each starting value ) of an iteration method analogous to Newton's method for quadratic polynomials to find the Proved roots for polynomials of the third degree , but also that no such algorithm exists for polynomials of higher degree. At the same time McMullen worked in the summer months (like Mumford) at the Thomas J. Watson Research Center of IBM in Yorktown Heights , where he worked on combinatorial optimization problems for VLSI design, but also Benoît Mandelbrot on the creation of computer graphics for iterating complex functions and limit sets Kleinscher groups assisted. As a post-doctoral student , McMullen was a Moore Instructor at the Massachusetts Institute of Technology and at the Institute for Advanced Study in Princeton in 1986/86 . In 1987 he became an assistant professor at Princeton University and a professor in 1990, but in the same year he went to the University of California, Berkeley as a professor , where he became Miller Professor in 1994 . In 1998 he went back to Harvard University, where he has been Maria Moors Cabot Professor since 2001 . From 2001 he was a regular visiting scientist at the Max Planck Institute for Mathematics in Bonn .

In his work on the dynamics of complex functions (in iteration, etc.) he applied a. a. Renormalization techniques from physics (quantum field theory) (like the physicist Mitchell Feigenbaum before him with the iteration of the quadratic mapping of the unit interval). With renormalization techniques he gave new proofs of theorems by Dennis Sullivan in complex dynamics and by William Thurston on hyperbolic 3-manifolds.

McMullen received the Salem Prize in 1991 and the Fields Medal in 1998 (Lecture: Rigidity and inflexibility in conformal dynamics ). He was a Sloan Research Fellow in 1984 and 1988 and a Presidential Young Investigator from 1988 to 1993. In 1990 he was invited speaker at the International Congress of Mathematicians in Kyōto ( Rational maps and Kleinian groups ).