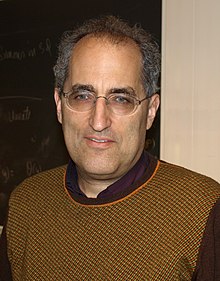 Edward Witten (born August 26, 1951 in Baltimore , Maryland ) is an American mathematician and physicist .

Witten, the son of the physicist Louis Witten , graduated from Brandeis University with a bachelor's degree in 1971 , initially studying history, then went to Princeton University , where he received his master's degree in physics in 1974 and his doctorate in 1976 with the dissertation Some problems in the short distance analysis of gauge theories . In 1976 he went to Harvard University as a post-doc , where he was a Junior Fellow from 1977 to 1980. In 1980 he became Professor at Princeton and in 1987 Charles Simonyi Professor of Mathematical Physics at the Institute for Advanced Study in Princeton .

Edward Witten made many significant contributions to physics and mathematics . Best known are his foundational work on string theory in the 1980s (he co- authored the 1986 two-volume standard work Superstrings with Michael Green and John Schwarz ), but he was also instrumental in the “Second Superstring Revolution” in the 1990s, the discovery of duality connections between the various superstring theories known at the time and their solutions. The list of his important works in this field is very long.

The last step towards a unification of the five different superstring theories and the eleven-dimensional supergravity in the M-theory (M optionally for "magical", "enigmatic" [original: "mystery"] or "membrane", as Witten once jokingly wrote, but originally "Membrane" meant) he presented in 1995 in a lecture at the University of Southern California . The M-theory, which cannot be tested experimentally at the moment, is regarded by string theorists as the most promising candidate for a unifying theory , which is quantum mechanics and could unite the general theory of relativity .

Edward Witten giving a lecture at Chalmers University of Technology

Witten impressed the mathematicians in the 1980s with new ideas for node invariants (from the integration of Chern-Simons forms in the corresponding quantum field theories) and other new topological structures that result from the transfer of ideas from quantum field theory ( topological quantum field theories and others ). The invariants by Simon K. Donaldson and Andreas Floer are also reinterpreted in this way. In 1990 he was the only physicist to be awarded the Fields Medal , the most important mathematics prize. In particular, he also investigated exactly solvable models of Yang-Mills theories with Nathan Seiberg (Seiberg-Witten theory). In "Supersymmetry and Morse theory" in 1982 he derived the Morse inequalities from supersymmetric quantum mechanics (these ideas also led to new proofs of the Atiyah-Singer index theorem a short time later ). In 2007 he and Anton Kapustin connected the geometric Langlands program with S-duality .

In 1981 he gave a simplified proof of the positivity of energy in general relativity (originally proven in 1979 by Shing-Tung Yau and Richard Schoen ).

In October 2016 Witten published together with Todd Gitlin , Peter Beinart , Michael Walzer , Adam Hochschild u. a. an open letter in the New York Review of Books calling for a targeted boycott of Israeli settlements in the occupied territories .

Witten has been married to the Italian physicist Chiara Nappi since 1979 . His brother Matt Witten is a TV scriptwriter and producer (including Dr. House ).

His hobby is tennis.

In 1982 Witten was a MacArthur Fellow . In 1985 he was awarded the Dirac Medal (ICTP) and the Albert Einstein Medal ; In 1990 he was the only physicist to receive the Fields Medal , in 2000 the Nemmers Prize for Mathematics , in 2001 the Clay Research Award and in 2004 the National Medal of Science . In 2006 he received the Henri Poincaré Prize . In 2002 he gave a plenary lecture at the International Congress of Mathematicians in Beijing (Singularities in String Theory) and in 1986 he was invited speaker at the ICM in Berkeley (Physics and Geometry). In 2010 he was awarded the Lorentz Medal and the Isaac Newton Medal . In 2012 he received the Fundamental Physics Prize , in 2014 the Kyoto Prize and in 2016 the Albert Einstein World Award of Science .