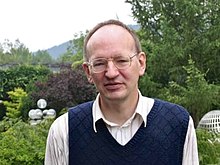 Gerd Faltings (born July 28, 1954 in Gelsenkirchen ) is a German mathematician and recipient of the Fields Medal . He is director at the Max Planck Institute for Mathematics and mainly deals with Diophantine equations , modular spaces and p-adic Galois representations .

Faltings grew up in a science-oriented family. His father was a physicist, his mother a chemist. Even as a schoolboy he stood out for his top mathematical achievements and won twice in the national mathematics competition .

After studying mathematics and physics at the Westphalian Wilhelms University in Münster (1972-1978), graduate and doctorate at Hans-Joachim Nastold to Dr. rer. nat. (1978) with his work On Macaulayfication , he went to Harvard University for a year with a grant from the German Research Foundation and completed his habilitation in 1981 in Münster .

In 1982 he moved to the University of Wuppertal and at the age of 27 became the youngest full professor of mathematics in Germany at the time .

In 1983 Faltings caused a sensation in the mathematical world with a 17-page paper on algebraic curves . In this work entitled Finiteness Theorems for Abelian Varieties on Number Fields , he proved at the age of only 27 that on algebraic curves over number fields of gender greater than 2 there can only be a finite number of points with rational coordinates , a conjecture of the British mathematician Louis Mordell - the so-called Mordell presumption  - from 1922, which was therefore unexplained for 60 years. In this work he also proves the Tate and Shafarevich conjectures at the same time and uses the Arakelov geometry. In 1986 he was awarded the Fields Medal for this breakthrough in algebraic geometry - the highest award in mathematics and in public perception, often compared with a Nobel Prize in other disciplines. He was the first and, until the award in 2018 to Peter Scholze, the only German to receive the Fields Medal. He later gave a second proof of the Mordell conjecture using Faltings' product theorem, in which he proved an even more general conjecture, the Mordell-Lang conjecture. In addition, together with Gisbert Wüstholz , he gave a new proof of Roth's theorem for which Roth received the Fields Medal in 1958.

In 1985 Faltings went to the USA for a long time and did research and taught at Princeton University , but kept a visiting professorship in Wuppertal. This triggered a public debate about the attractiveness of Germany as a research location for young scientists.

In 1994 Faltings returned to Germany and became a Scientific Member at the Max Planck Institute for Mathematics in Bonn, where he also took on one of the management posts from 1995.

Faltings also made a significant contribution to the solution of the so-called Fermat Hypothesis by the British mathematician Andrew Wiles .

In addition to specialist literature, Faltings has also published a collection of essays that is understandable for non-mathematicians as an introduction to modern mathematics.

Faltings is widowed and has two daughters.