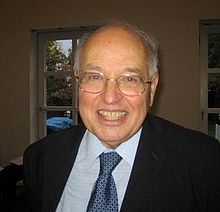 He was the son of the Anglo-Lebanese writer and temporary secretary of the Arab League in London Edward Atiyah (1903-1964) and the Scot Jean Levens. Atiyah had a sister and two brothers, including law professor Patrick Atiyah (1931-2018). He went to school in Khartoum until 1941, with the family mostly spending the summers in England. Then the family went to Lebanon. Atiyah was soon sent to the Victoria School in Cairo, and when his father moved to England in 1945 he attended Manchester Grammar School. In 1947 he won a scholarship to Cambridge University (Trinity College), but preferred to do his two years of military service first before beginning his studies at Trinity College in 1949. In 1952 he received his bachelor's degree. After completing his doctorate with William Vallance Douglas Hodge (dissertation: Some Applications of Topological Methods in Algebraic Geometry ), he became a "Fellow" of Trinity College in 1954 . In 1955/56 he was a Commonwealth Fellow at the Institute for Advanced Study in Princeton , where he met Jean-Pierre Serre , Friedrich Hirzebruch , with whom he was friends and worked closely, Kunihiko Kodaira , Donald Spencer , Raoul Bott and Isadore Singer , among others . In 1957 he became a Lecturer and 1958 Fellow of Pembroke College , Cambridge, before he went to Oxford University as a reader in 1961 , where he became a Fellow of St. Catherine's College and in 1963 the Savilian Professorship in Geometry . From 1969 to 1972 he was Professor at the Institute for Advanced Study at Princeton and then Royal Society Research Professor at Oxford and Fellow at St. Catherine's College. In 1990 he became director of the newly founded Isaac Newton Institute for Mathematics in Cambridge and at the same time "Master" of Trinity College.

In 1955 he married the mathematician Lily Brown (1928-2018), with whom he had three sons. She received her PhD from Mary Cartwright and was a lecturer at Bedford College before giving up her mathematical career.

Atiyah initially studied algebraic geometry as a student of Hodge . As a student, he won the Smith Prize in 1954 for a thesis on the theoretical treatment of ruled surfaces . His dissertation dealt with a theory of the second kind of integrals on algebraic varieties by Solomon Lefschetz .

In the 1960s he and Friedrich Hirzebruch were one of the founders of the topological K-theory , a cohomology theory defined with the help of vector bundles . The suggestion for this came from the generalization of the Riemann-Roch theorem by Alexander Grothendieck and the periodicity theorem by Raoul Bott . For example, Atiyah applied topological K-theory to a simplification of the complicated solution of the Hopf invariant 1 problem by John Frank Adams and other topological problems. In 1963, together with Isadore M. Singer , he proved the Atiyah-Singer index theorem , which is considered one of the most important mathematical theorems of the 20th century. The theorem expresses the analytic index of an elliptic linear differential operator ( e.g. Laplace operator , Dirac operator ) on a compact manifold M by topological invariants of M (different depending on the type of operator, in the simplest case by the Euler-Poincare characteristic ). So it combines analysis with topology and has applications in modern physics. The “index” of the differential operator is the difference between the dimensions of its solution vector space and that of its adjoint operator. He also took part in the new, simpler proofs of this theorem with the help of the heat conduction equation (diffusion equation) in the 1970s (with Raoul Bott, Patodi 1973). The index theorem also has applications in algebraic geometry - it contains the Riemann-Roch theorem as a special case. In connection with the index theorem, Atiyah and Singer also “discovered” the Dirac operator for mathematics. The motivation for the famous theorem came from Israel Gelfand ( On elliptic equations , Russ. Math. Surveys 1960).

Atiyah has worked as a tireless mediator between mathematics and physics for decades. He was particularly interested in the non-Abelian gauge theories ( Yang-Mills theories ), which are nonlinear differential equations on manifolds. The ADHM construction of instantons in self-dual Euclidean Yang-Mills theories comes from him and Nigel Hitchin , Vladimir Drinfeld and Yuri Manin . But he also took up the quantum field theoretical methods introduced into mathematics by Edward Witten in particular (from new knot invariants to topological quantum field theories to supersymmetry and string theory ). In this way, many of Atiyah's ideas were reversed from the 1980s onwards by physicists (including new proofs of his index theorem with supersymmetry) and developed further.

From 1997 to 2002 he was President of the Pugwash Conferences on Science and World Affairs .