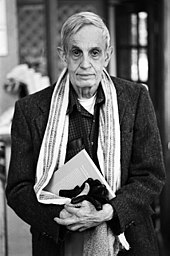 John Forbes Nash, Jr. (born June 13, 1928 in Bluefield , West Virginia , † May 23, 2015 near Monroe Township , New Jersey ) was an American mathematician who worked particularly in the areas of game theory and differential geometry, as well as in the field of partial differential equations worked. In 1994, together with Reinhard Selten and John Harsanyi, he received the Alfred Nobel Memorial Prize for Economics for their joint achievements in the field of game theory. This made Nash one of the few mathematicians to receive this award. In 2015 he received the Abel Prize , one of the most important science prizes in the field of mathematics.

After a promising start to his mathematical career, Nash fell ill with schizophrenia at the age of thirty . Nash recovered from the disease in the early 1990s. His story became known to a wider audience in late 2001 through the award-winning feature film A Beautiful Mind . 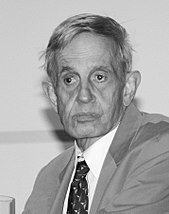 From 1945 to 1948 Nash studied at the Carnegie Institute of Technology in Pittsburgh , where he received his bachelor's degree in 1945 and his master's degree in 1948. Originally he wanted to be an engineer like his father , but developed a great passion for mathematics . He was also interested in physics and even presented one of his theories to Albert Einstein when he began to study at Princeton in 1948, but at the end of the conversation he advised him to "study more physics".

While still in Pittsburgh, he began to be interested in the negotiation problem, the solution of which John von Neumann and Oskar Morgenstern had left open in their 1944 book Theory of Games and Economic Behavior .

Nash received his doctorate in 1950 from Princeton University with the mathematician Albert W. Tucker . The thesis entitled Non-cooperative Games advanced game theory of Morgenstern and von Neumann to the so-called Nash equilibrium ( English Nash equilibrium ). Nash proved that this equilibrium - deviating from the solutions - also exists for non- zero-sum games and for more than two players.

It is based on a set of strategies (such as price policy ) from players ( competitors in the market). One situation where neither player can benefit from changing their strategy if the other players leave their strategies unchanged is a Nash equilibrium. The importance of this work from 1950 was only recognized later in connection with the further development of game theory and in 1994 earned him the Alfred Nobel Memorial Prize for Economics . Von Neumann himself was unimpressed at a meeting with Nash at the time; he considered the result to be trivial and only mentioned it indirectly in the introduction in the new edition of his book with Morgenstern on game theory from 1953. Nash himself also rated the work more as a by-product compared to his later work. In the event that his work on game theory was not accepted, he would have already prepared another work in algebraic geometry , says Nash.

In 1952 his work on real algebraic manifolds appeared , which he himself considered to be his perfect work. The idea behind it was to approximate each manifold by an algebraic variety (which were much easier to handle and describe by polynomials), possibly by moving to spaces of much higher dimension. In this context, Nash manifolds and Nash functions are named after him.

After receiving his doctorate, Nash increasingly turned to analysis , in particular differential geometry and partial differential equations. He proved that every Riemannian manifold can be isometrically embedded in the Euclidean manifold ( Nash's embedding theorem ). The question of whether this is possible was already asked by Bernhard Riemann , and the popular opinion in the 1950s was that it was not. Nash's result was unexpected and had far-reaching consequences. A partial result of his embedding theorem was used by Jürgen Moser in 1966 in the theory of nonlinear partial differential equations and is known as the Nash and Moser theorem.

From 1950, Nash spent four years in the summer months of the Rand Corporation doing clandestine research, including Kenneth Arrow , John Milnor (who worked with Nash at Rand), and others on applications of game theory to strategic Cold War situations . From 1951 to 1953 Nash Moore was an instructor at the Massachusetts Institute of Technology and from 1953 he was an assistant professor there and from 1957 to 1959 an associate professor. In 1955 he submitted a proposal for an encryption method to the National Security Agency , but received a rejection.

In 1947, Nash designed the game, which is now marketed under the name " Hex ", through considerations of game theory, independently of the Dane Piet Hein a few years earlier. A prototype was built by David Gale , a friend of Nash, and the game was soon popular among mathematicians at Princeton such as John Milnor. Around 1950 he spent a lot of time in Princeton with board games (especially chess , Go , where Ralph Fox was a master, and the so-called war game ) and together with other students also developed the game So Long Sucker .

By the late 1950s, Nash was widely recognized as a leading mathematician, which was reflected in an article in Forbes Magazine , and he was nominated for the Fields Medal in 1958 , particularly for his work on Hilbert's 19th problem concurrent with de Giorgi. In the final evaluation, he was third behind Klaus Roth and René Thom , who finally received the Fields Medal in 1958. He was on the verge of a full professorship at MIT when the first signs of Nash's disease became apparent in 1959. In May 1959 he was diagnosed with paranoid schizophrenia . According to the Nash biographer Sylvia Nasar , Nash was now increasingly showing anti-Semitic tendencies and prone to outbreaks of violence. Nash gave up his position at MIT and, after a short hospital stay, went to Paris and Geneva in 1959/60, where he saw himself as a global citizen and exile. In Luxembourg he said he tried to return his American citizenship.

In 1961, his wife Alicia Lardé and his mother were forced to admit Nash to a mental hospital ( Trenton State Hospital). Here he was treated with insulin shock therapy, which put him into a coma. He recovered and was able to attend a conference on game theory in 1961. In 1961/62 and 1963/64 he was again at the Institute for Advanced Study, in 1962 he visited Paris, London and Geneva again, and then returned to Princeton.

In 1964 his schizophrenia became so severe that he had to be admitted to a psychiatric clinic (the private Carrier Clinic in Belle Mead , New Jersey ) for a long time , and he was in Paris again in 1965 (at the invitation of Alexander Grothendieck ). For the next 20 years he was repeatedly in hospitals for relapses. As a result of his illness, he did not bring out any publications between 1966 and 1996. Before that, however, some outstanding works appeared. From the 1960s came an idea in the theory of the resolution of singularities in algebraic geometry known as Nash Blowing Up (so called by Heisuke Hironaka , whom Nash orally conveyed the idea to), and some influential work on partial differential equations. From 1965 to 1967 Nash was at MIT , supported by prominent US mathematicians such as John Milnor, who knew him from college days . From the 1970s to 1990s he lived in Princeton, where he could be seen regularly on campus. While he initially caught the students' attention with strange messages he left behind, mathematicians at Princeton (like Peter Sarnak ) began to notice by the early 1990s that he had regained some of his old problem-solving skills. In his last years he increasingly turned to monetary theory, advocating index money .

He was married to Alicia Lardé for the second time since 2001 (first marriage from 1957, divorced in 1963). They had a son (* 1959); he also had a son (* 1953) from a previous relationship. Nash died along with his wife in a traffic accident on the New Jersey Turnpike in May 2015 ; they were in a taxi on their way home from receiving the Abel Prize . Both were not wearing their seat belts and were thrown out of the vehicle.

The 2001 feature film, A Beautiful Mind, starring Russell Crowe , tells the story of Nash's ingenious designs, illness, and recovery; the film won four Academy Awards in 2002 . The script is based on the 1998 biography of the same name by Sylvia Nasar. The film adaptation only agrees in corner points with Nash's biography; many details are fictitious.

In addition, the life of Nash has also been portrayed in documentaries: