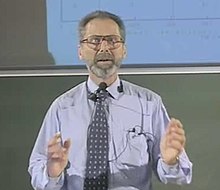 Yves François Meyer (born July 19, 1939 in Paris ) is a French mathematician who deals with harmonic analysis .

Meyer grew up in Tunisia , attended the Lycée Carnot in Tunis and won first place in the national competition ( concours ) for access to the elite schools in both ancient Greek and French , where he had only attended one of the preparatory schools for the elite universities for one year . He studied from 1957 to 1960 at the École normal supérieure , received the Agrégation and then initially taught for three years at the Prytanée Militaire in La Flèche, preparing his dissertation and being accepted into the national research organization CNRS . He received his doctorate in Strasbourg in 1966 , although he said he was his own doctoral supervisor, but was officially awarded his doctorate by Jean-Pierre Kahane . From 1963 he taught at the University of Strasbourg. He researched and taught at the University of Paris-South in Orsay as a professor from 1966 to 1980, then until 1986 at the École Polytechnique , 1985 to 1995 at the University of Paris-Dauphine and then at the École normal supérieure de Cachan , where he was professor Emeritus at the CMLA ( Center de Mathematiques et leurs Applications ).

Meyer was one of the pioneers of the wavelet transformation in the 1980s with Ingrid Daubechies , Jean Morlet , Alex Grossmann and others . His preoccupation with it began after reading an essay by Morlet and Grossmann in 1984, after which he immediately contacted them. With Stéphane Mallat , he developed the multi-scale approximation (Multiresolution Analysis, MRA). With the help of wavelets and with Pierre Gilles Lemarié-Rieusset, he showed in 1986 that wavelets can form orthogonal bases. With Ronald Coifman he introduced wavelet packets and local trigonometric bases. In 2001 he developed a method of image processing that divided images into cartoons (the piece-by-piece, steady “geometric” component) and texture (described by rapidly oscillating functions).

At the beginning of his career and in his dissertation, he dealt with applications of harmonic analysis in number theory, for example in Diophantine approximations. For example, he found number sequences whose terms can come as close as desired to the natural numbers and for which the following applies: is uniformly distributed mod 1 in the unit interval if and only if is transcendent . At the beginning of the 1970s he developed his theory of model sets (model sets, Meyer sets) in number theory, point sets that generalize lattices but have less symmetry, with later applications to quasicrystals and other aperiodic structures. He later dealt with these topics with the theory of wavelets.

In analysis he proved the continuity of the Cauchy integral operator with Ronald Coifman and Alan McIntosh , a central problem in the theory of the singular integral operators by Alberto Calderón and Antoni Zygmund . Some of Meyer's students also achieved outstanding results in this area, which Meyer focused on from the mid-1970s to the mid-1980s. Meyer himself was later able to show that the theory of wavelets provided a particularly simple decomposition of the operators of the Calderon-Zygmund type.

With Marco Cannone he applied methods of harmonic analysis (Littlewood-Paley decomposition) to the initial value problem of the Navier-Stokes equation , and he applied various wavelet methods there.

He has been a corresponding member of the Académie des sciences since 1986 and a full member since 1993 . He held the Cours Peccot at the Collège de France . In 1970 he received the Salem Prize , the highest international award for harmonic analysis, in 1972 the Prix Carrière and in 1984 the Grand Prix of the Académie des Sciences. In 1970 he was invited speaker at the International Congress of Mathematicians in Nice ( Nombres de Pisot et analyze harmonique ), 1983 in Warsaw ( Intégrales singulières, opérateurs multilinéares, analyze complexe et équations aux derivées partielles ) and in 1990 in Kyoto ( Wavelets and applications ). In 2000 he gave a plenary lecture at the 3rd European Congress of Mathematicians in Barcelona ( The role of oscillations in some nonlinear problems ). In 2010 he received the Carl Friedrich Gauß Prize at the International Congress of Mathematicians in Hyderabad . He is a member of the American Academy of Arts and Sciences and an honorary doctorate from the Universidad Autonoma de Madrid . He is a fellow of the American Mathematical Society . In 2014 he was elected as a foreign member of the National Academy of Sciences . On March 21, 2017 he was awarded the Abel Prize, the award ceremony took place on May 23, 2017 by the Norwegian King Harald V. In 2018 Meyer gave the Lars Onsager Lecture . In 2020 he was awarded the Princess of Asturias Prize in the "Science" category.

He is married and has two children.