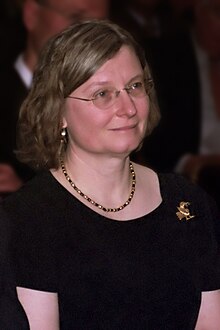 Ingrid Chantal Daubechies (born August 17, 1954 in Houthalen , Belgium ) is James B. Duke Professor at Duke University and was previously Professor and Director of the Mathematics Department at Princeton University , USA . With the wavelets she introduced and examined (see Daubechies wavelets ) she laid the foundation for the practical application of the wavelet transformation .

Ingrid Daubechies grew up in Belgium as the daughter of a mining engineer and a criminologist. After finishing school, she studied physics at the Vrije Universiteit Brussel and received a bachelor's degree in physics in 1975. In 1980 Daubechies did his doctorate in physics with Jean Reignier (and Alex Grossmann ) with the dissertation Representation of Quantum Mechanical Operators by Kernels on Hilbert Spaces of Analytic Functions and after completing her doctorate worked until 1987, first as a research assistant, later as a research lecturer in the theoretical department Physics at the Free University of Brussels. In 1987 Ingrid Daubechies moved to the USA to work as a technical assistant in the mathematical research center of the AT&T Bell Laboratories to further develop the wavelet theory. Simultaneously to her work in the Bell Laboratories, she taught in 1990 as a professor at the University of Michigan and from 1991 to 1994 at Rutgers University in the US state of New Jersey . Ingrid Daubechies has been Professor of Mathematics at Princeton University since 1993 and its director since 1997. In 2011 she moved to Duke University after 16 years at Princeton . Her research focus is on the mathematical aspects of time-frequency analysis, especially wavelets and their applications.

She is married to the mathematician and computer scientist Robert Calderbank and has two children.

Anna C. Gilbert is one of her PhD students .

In 1992 Ingrid Daubechies was a MacArthur Fellow . The following year, the American Academy of Arts and Sciences accepted her as a member. The American Mathematical Society , of which she is a fellow, awarded her the 1994 Leroy P. Steele Prize in writing for her book Ten Lectures on Wavelets . In 2006 she gave the Noether Lecture . Also in 1994 she gave a plenary lecture at the ICM in Zurich (Wavelets and other phase localization methods). In 1998 she was elected a member of the National Academy of Sciences and the Institute of Electrical and Electronics Engineers . Since 1999 she has been an external member ( Foreign Member ) of the Royal Netherlands Academy of Sciences and since 2009 the French Academy of Sciences . In 2000 Daubechies received the NAS Award in Mathematics . In 2004/05 and 2005/06 she was on the Abel Prize Committee . In 2007 she was awarded the Pioneer Prize at the ICIAM Congress in Zurich. She received it together with Heinz Engl from the Johannes Kepler University Linz . In 2011 she received again the Leroy P. Steele Prize for outstanding research achievements and in particular her work Orthonormal bases of compactly supported wavelets (Communications on Pure and Applied Mathematics, Volume 41, 1988, pp 909-996). Also in 2011 she was awarded the Benjamin Franklin Medal and the IEEE Jack S. Kilby Signal Processing Medal . In 2012 she received the Nemmers Prize for Mathematics and the BBVA Foundation Frontiers of Knowledge Award . In 2015 she gave the Gauss lecture and was elected to the Academia Europaea . For 2019 she was awarded the UNESCO L'Oréal Prize . She is a member of the American Philosophical Society (2003) and an honorary member of the London Mathematical Society (2007) as well as an honorary doctorate from several universities. In 2019 Ingrid Daubechies was accepted as a member of the National Academy of Sciences Leopoldina . In 2020 Daubechie's Colloquium Lecturer of the American Mathematical Society . Also in 2020 she was awarded the Princess of Asturias Prize in the "Science" category.