The term wavelet describes the basic function used for the transformation , with which the signal or image to be analyzed - generally an N-dimensional function - is “compared”.

The roots of the wavelet school are in France, where the originally French term ondelette was coined, but its English counterpart wavelet later became the name of the game. Translated into German, wavelet means something like small wave or ripple and expresses the fact that, in contrast to the Fourier transformation, temporally localized waves or functions are used as a basis, which enables the time and frequency resolution mentioned above. Like all linear time-frequency transformations, the wavelet transform is also subject to the uncertainty relation of communications engineering , i.e. H. an event cannot be localized at the same time as precisely as required in terms of time and frequency. There is always only one compromise between good temporal resolution or good resolution in the frequency domain.

The wavelet transform can be seen as an improvement on the short-term Fourier transform (STFT).

With the STFT, a window function is applied to the signal to be examined - for example the Gaussian bell curve as in the Gabor transformation . For each point of the STFT, the window is shifted to the point in time to be considered and to the frequency to be considered (modulation in the time domain). The absolute duration and bandwidth of the window (“width” in the time and frequency domains) - and thus the resolution - do not change as a result.

Summary of how it works 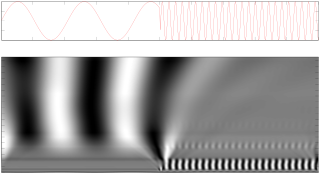 With the wavelet family derived from the Mother wavelet

A wavelet is a square-integrable function that can be selected relatively freely. In general, there is another technical requirement for a wavelet, the admissibility condition :

Here called the Fourier transform of . The admissibility condition is needed for the proof of some central theorems and properties, which is why it is often included in the definition of a wavelet.

A direct consequence of the admissibility is that the Fourier transform of the wavelet vanishes at the point 0:

It also follows that the first moment of the wavelet, i.e. its mean value, vanishes:

It is the dual wavelet function .

The wavelet transform of the wavelet itself is referred to as the reproducing kernel . Thus designated

the core of the wavelet .

This is not an ordinary convolution as it is not commutative; however, it is associative.

so just given by the reproducing core.

The wavelet packet transformation is an extension of the fast wavelet transformation (FWT) in that not only the low-pass channel but also the band-pass channel are further split by means of the wavelet filter bank. This can be used to convert a standard 2-channel DWT such as B. the Daubechies wavelets to obtain an M-channel DWT, where M is a power of 2; the exponent is called the depth of the packet tree. This method is used in broadband data transmission as an alternative to the fast Fourier transformation .

If white noise is transformed as an input signal in a recursion step of the FWT , the result is again white noise due to the orthogonal nature of the DWT, with the energy (= square sum of the samples) being evenly distributed between the low-pass and band-pass channels. If one takes the greatest possible deviation from this behavior, i. H. the most complete possible concentration of the signal energy on one of the two channels, as a decision criterion as to whether the input channel should be split, and if this method is continued for the split channels, a variant of a best-base method is created.