In digital signal processing , a window function defines the weighting with which the sampled values ​​obtained during the sampling of a signal within a section (window) are included in subsequent calculations. Window functions are used in frequency analysis (e.g. using discrete Fourier transform ), filter design, beamforming and other signal processing applications.

A continuous signal is usually processed in blocks. As block lengths are, in practice, finally, there is the so-called spectral leakage ( English leakage effect ), when the block length is not a multiple of the period natürlichzahliges of the signal. The calculated frequency spectrum is too wide, figuratively speaking it is "smeared". This effect results from the properties of the Fourier transform .

By using a suitable window function, the effect can be reduced, but not completely avoided. The signal is mostly "faded in" at the beginning of the window and "faded out" at the end of the window, which leads to an artificial periodization of the signal within the time window length.

In addition to the spectral broadening, the window function also influences the frequency selectivity and the maximum possible spectral error. There are various window functions of varying complexity. The selection of a suitable window function is therefore always a compromise that takes into account the special requirements of the respective application.

A frequently used method for the design of digital filters with a finite impulse response (FIR filter) is the window method .

Here is an integer window width. The current index of the input signal is . Unless otherwise noted, it goes in the following representations , the maximum is at . In addition, an equal and shifted in phase and balanced representation to 0, as does English -zero phase called. In this case the index goes from

the maximum is in this form of representation at .

The rectangular window function , also referred to as a Dirichlet window (after Peter Gustav Lejeune Dirichlet ), is 1 in the entire window area and 0 outside of it. The function is given as:

The simple processing of the input signal in blocks corresponds to the use of this window function. The amount spectrum corresponds to the amount curve of the si function . Only in special case where the window width exactly comprises an integer multiple of the period of the harmonic signal oscillation, the windowing occurs at time-discrete signals according to the rectangular window no spectral leakage on.

The Von Hann window is based on a superposition of three spectrally shifted si functions in order to achieve a stronger suppression of the sidelobes compared to the rectangular window with only one si function in the spectrum. The disadvantage is a reduction in frequency resolution. The Von Hann window with the Haversine function is also known as the raised cosine window , with the following function:

This is also shown in the adjacent figure.

In addition, the symmetrical representation with the Havercosine function around and without phase shift is also used in the literature :

and in this case with the index in the range

The function is given as

where is the window width and the current index of the input signal.

This window function is named after Richard Hamming and represents a modification of the Von-Hann window. In general, the Von-Hann and Hamming windows with the two coefficients and can be expressed as:

The two coefficients are 0.5 for the Von Hann window. The maximum of the window function is the same . If the window is normalized in such a way that , one degree of freedom remains. In the Hamming window, the coefficients are chosen so that the zeros of the two adjacent and largest side lobes are suppressed to the maximum. This corresponds to a different weighting of the individual si functions in the spectrum of the window function. This condition results in

Rounding to two decimal places for practical implementations results in an attenuation of the first two sidelobes of approx. −42.76 dB in the Hamming window. 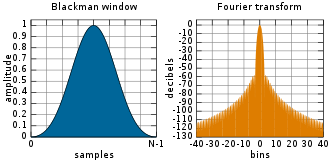 Blackman windows are defined as:

Frederic J. Harris published this function in 1978 as a modification of the Blackman window function. 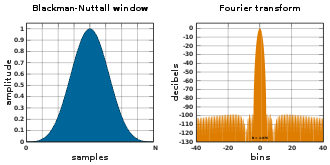 Except for the four almost identical coefficients, the Blackman-Nuttall window is identical to the Blackman-Harris window, which shows the influence of the necessary precision in the implementation of the coefficients in this class of window functions. 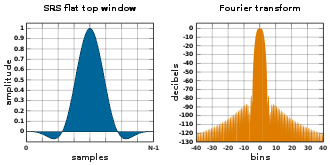 Exemplary flat-top window function in the SR785 from SRS

The flat-top window is a partially negative window function, which is used, among other things, in spectrum analyzers for measuring and evaluating the amount of individual amplitudes . The flat-top window has a comparatively small amplitude error; the disadvantage is the poor frequency resolution.

As an example, the following flat-top window function is used in the SR785 spectrum analyzer from Stanford Research Systems (SRS), as shown in the figure below:

This window function is named after Albert Charles Bartlett :

A closely related variation of the Bartlett window function is based on the triangle function and has no zero values ​​as a difference between the start and end values. It is defined as 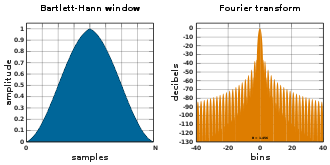 This is a combination of the triangle function of the Bartlett function with the Hann window function: 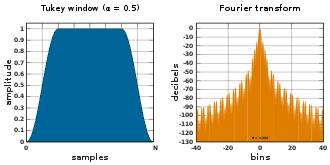 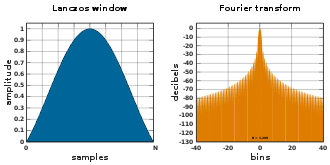 The Lanczos window is based on the normalized si function , similar to the Lanczos filter : 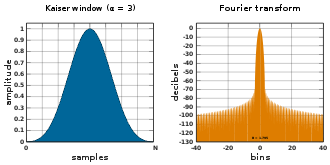 The window is defined by the function:

Here is the modified Bessel function of zero order. The window width is and is a real factor that determines the shape of the window. The larger , the narrower the window and corresponds to a rectangular window.

The Fourier transform of the window is defined by the function

for the normalized frequency .

and the relative damping of the secondary maximum

to calculate. As a result, when it becomes larger, the width of the main maximum increases and the relative amplitude of the secondary maximum decreases.

The Gaussian window is based on the Gaussian bell curve , which expands to infinity and therefore has to be executed for a limited time. This means a combination with the rectangle window.

The window is given as:

Comparison of the window functions

Relative amplitude of the secondary maximum

Strong secondary maxima of a window function increase the leakage effect in the frequency analysis and indicate a low dynamic of the window function.

The maximum sampling error is defined as the ratio of the amplitude of the main maximum to the amplitude at the frequency / window length.

Comparison according to the above evaluation criteria

Broadening the main maximum leads to a faster decrease in the secondary maxima. This is shown by way of example in the illustration on the right using rectangular and Hamming windows.