Richard Wesley Hamming (born February 11, 1915 in Chicago , Illinois , † January 7, 1998 in Monterey , California ) was an American mathematician whose work had a great influence on computer science and telecommunications .

His scientific career initially took him to the University of Louisville as a research assistant . From 1945 he worked on the Manhattan project in Los Alamos . There he was busy programming the first digital computers for physical calculations. Their aim was to clarify whether the earth's atmosphere would burn if an atom bomb was detonated. The calculations showed that this would not happen. The United States then detonated several atomic bombs, first during a test in New Mexico , and later twice in the war against Japan .

From 1946 Hamming worked with Claude Shannon and John W. Tukey at Bell Labs, among others . In 1976 he moved to the Naval Postgraduate School as Associate Professor of Computer Science . He worked here until his retirement in 1997.

He was a co-founder of the Association for Computing Machinery and at times also its president. From this organization he received the Turing Award in 1968 for his publications on numerical methods, automatic coding systems , error-detecting and error-correcting codes.

Hamming died of a heart attack in 1998, leaving behind his wife Wanda. 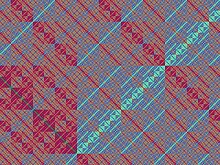 Visualization of the Hamming distance

Hamming is considered to be one of the founders of algebraic coding theory . His most important scientific contributions include the Hamming code (enables the detection of up to two and the correction of a bit error, initially used by Bell in exchanges), the Hamming distance (a measure of the difference in character strings) and the Hamming code based on it. Similarity (a measure of similarity for case-based reasoning ).

However, the focus of his work was on numerical analyzes and the development of digital filters, including the Hamming window , which allows certain sections of a signal to be viewed in isolation.

Hamming was also a prolific book author and is known for his aphorisms .

In 1968 Hamming received the Turing Prize and was made a Fellow of the IEEE . In 1980 he became a member of the National Academy of Engineering , and in 1996 he received the basic award of the Eduard Rhein Foundation .

The Richard W. Hamming Medal is an important award from the IEEE named after Hamming. He was the first to win the prize in 1988.