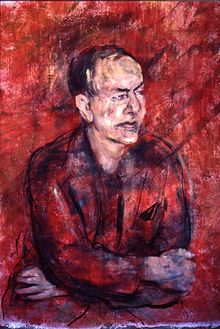 Herbert Alexander Simon (born June 15, 1916 in Milwaukee , Wisconsin , † February 9, 2001 in Pittsburgh , Pennsylvania ) was an American social scientist . In 1978 he received the Alfred Nobel Memorial Prize for Economics “for his groundbreaking research into decision-making processes in business organizations” .

Simon was the son of parents of German origin; his father, Arthur Simon, an electrical engineer (TH Darmstadt), had emigrated from Ebersheim to the USA in 1903 ; his mother, Edna Marguerite Merkel, a pianist, had ancestors in Prague and Cologne . After attending a high school , he pursued the model of an uncle, a social scientist, and studied social sciences in Chicago from 1933 . His goal was to become a mathematical social scientist in order to support social science with an analytical and systematic basis. In 1936 he completed his university studies and worked as a research assistant in the city administration until 1939 and as head of a research group at the University of Berkeley from 1939 to 1942 . Since his university days, his topic has been the decision-making processes in organizations. Parallel to his time at Berkeley, he received his PhD from the University of Chicago on decision-making in administrative organizations.

Simon took up a position as a political scientist at the Illinois Institute of Technology in Chicago in 1942, while at the same time establishing contacts with economists (including Milton Friedman ) at the University of Chicago and attending lectures in economics . In addition to his mathematical and social science orientation, he now received a sound education in economics. Since 1949, he and other scientists at the Carnegie Institute of Technology built a postgraduate course in industrial management. He was also a member of the commission responsible for coordinating the Marshall Plan .

Simon never entirely abandoned the original research area of ​​decision-making within organizations. The subject occupied him continuously over the next few decades without giving up his normal teaching activity. Since 1954 Simon researched these processes with the help of computer simulations , and in 1956 he developed the Logical Theorist with Allen Newell . For the first time, this program was able to prove a set of logical theorems . Specifically, the Logical Theorist proved 38 theorems from the Principia Mathematica by Bertrand Russell and Alfred North Whitehead . This result was a milestone in artificial intelligence , as it was shown that programs are capable of actions for which a human needs intelligence . Another important step towards machine problem solving was the General Problem Solver software, which was also developed with Newell . In 1959 Simon was elected to the American Academy of Arts and Sciences and the American Philosophical Society , and in 1967 to the National Academy of Sciences .

He was also a member of the scientific advisory staff to Presidents Johnson and Nixon between 1968 and 1971 .

Simon had been married to Dorothea Pye since 1937. The couple had three children.