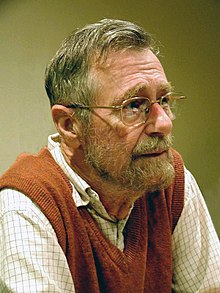 Edsger Wybe Dijkstra ( ˈɛtˌsxər 'ʋibə ˈdɛɪkˌstra listen ? / I ; *  May 11, 1930 in Rotterdam ; †  August 6, 2002 in Nuenen ) was a Dutch computer scientist . He was the pioneer of structured programming . In 1972 he received the Turing Award for fundamental contributions to the development of programming languages .

Edsger Dijkstra was born the son of a chemist and a mathematician . After attending the Erasmianum grammar school in Rotterdam, he studied mathematics and theoretical physics at the University of Leiden from 1948 . In 1951 he achieved his bachelor's degree and then attended a programming course with Maurice V. Wilkes at the University of Cambridge . He continued his studies in Leiden, but from then on worked at the Mathematisch Centrum (today Centrum Wiskunde & Informatica - Center for Mathematics and Computer Science) in Amsterdam . His supervisor there was director Adriaan van Wijngaarden , who also persuaded him to switch entirely to programming instead of doing theoretical physics at full speed. In 1956 he obtained his master's degree and went to the Mathematisch Centrum as a full-time employee. Dijkstra is known as the first programmer in the Netherlands and wrote his doctoral thesis in 1959 at the University of Amsterdam on the Electrologica X1 developed by the Mathematisch Centrum , the basic software of which he wrote.

In 1962 Dijkstra became a mathematics professor at the Eindhoven University of Technology . He did not want to take up computer science chairs that were already offered elsewhere, as he did not see a sufficient scientific basis for this. Nevertheless, he offered his students the opportunity to specialize in computer science topics after studying mathematics for at least three years. He continued to believe that a degree in computer science should have a strong mathematical character and that an introductory course in programming, for example, should be a formal mathematical event free of programming languages. From 1973 onwards, he limited his work at the university to an extraordinary professorship, represented by the Eindhoven Tuesday Afternoon Club , which he had established , where he discussed scientific problems and the latest publications with colleagues on Tuesday afternoons , and became a full-time Research Fellow of the Burroughs Corporation . In 1984 he moved to the Schlumberger Centennial Chair in Computer Sciences at the University of Texas at Austin . In 1999 he retired .

Dijkstra died of cancer in his home in Nuenen. He left behind his wife Ria, whom he married in 1957, and three children.

His doctoral students include Arie Habermann and Martin Rem .

His contributions to computer science include the Dijkstra algorithm for calculating a shortest path in a graph (published in a three-page article in 1959), the first introduction of semaphores for synchronization between threads and the philosopher's problem associated with it, as well as the banking algorithm . He also developed the Shunting yard algorithm , an algorithm for converting mathematical terms from the infix notation into the reverse Polish notation or into an abstract syntax tree .

Based on this experience, he designed the multitasking operating system THE (after Technische Hogeschool Eindhoven ), which became known for its layered structure. Niklaus Wirth reports that in the course of this work Dijkstra realized that he was not suitable for teamwork and from then on only worked alone.

At the end of the 1950s Dijkstra was involved in the design of Algol 60 , and in 1960 he completed the first compiler for it. He also designed the sorting algorithm Smoothsort and rediscovered the algorithm of Prim (also Prim-Dijkstra algorithm or algorithm of Jarnik, Prim and Dijkstra ).

Dijkstra wrote over 1300 manuscripts of a professional and private nature, which he photocopied and sent to several colleagues by post, but mostly not published. Today many of these so-called EWD manuscripts (after his initials) are collected in an online archive. He wrote over 500 scientific reports for the Burroughs Corporation. His most popular treatise is Go To Statement Considered Harmful On The Goto Command And Why It Should Not Be Used. He introduced the concept of structured programming into computer science and in his Turing lecture The Humble Programmer also popularized the concept of the software crisis , which he had taken up there as a regular speaker at Friedrich L. Bauer's International Summer School in Marktoberdorf .