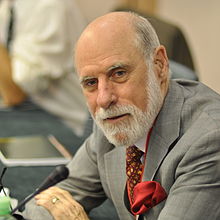 Vinton "Vint" Gray Cerf (born June 23, 1943 in New Haven , Connecticut ) is an American computer scientist who is referred to along with others as the "father of the Internet ". In 2004 he was awarded the Turing Prize and in 2008 the Japan Prize .

Vint Cerf was very interested in math and chemistry as a child . After the completion of the Van Nuys High School in 1961, he studied on a scholarship from North American Rockwell in Stanford Mathematics with the degree Bachelor of Science in 1965. He then worked at IBM as a systems engineer at QUIKTRAN - Time - sharing system. A few years later he continued his studies at UCLA , earning a Master of Science degree in computer science in 1970 and his doctorate ( Ph.D. ) with Jerry Estrin in 1972 with his thesis Multiprocessing, Semaphores and a Graph Model of Computation .

Cerf played a key role in the development of the Internet and used the internet connection protocols . While still a student he submitted along with his high school -Freund and fellow students Steve Crocker for Jacobi system of DARPA an offer for the tender of the ARPANET . This was rejected, but Cerf and Crocker were involved via Leonard Kleinrock's Network Measurement Center in the installation of the Arpanet, which was finally implemented by Bolt Beranek and Newman under the direction of Bob Kahn , and were involved in the specification of the Arpanet host protocols under the supervision of Lawrence Roberts involved.

After completing his studies, Cerf was assistant professor for electrical engineering and computer science at Stanford until 1976 , supported Kahn's group in coordinating the public demonstration of the Arpanet and then developed the Transmission Control Protocol (TCP) and the Internet with his students and Kahn Protocol (IP). In September 1973 they presented a first version of TCP / IP , which was also published in May 1974. During his time at Stanford, Cerf also headed the International Network Working Group , which later became part of the IFIP .

Between 1976 and 1982 he was program manager and later chief scientist in the Information Processing Techniques Office of DARPA , where he headed the Internet project that emerged from the Arpanet and other projects started by Kahn on packet-switched data transmission via satellite and radio as well as one on network security .

Vint Cerf is the author of several RFCs and founder of the Internet Society (ISOC), of which he was president from 1992 to 1995. From 1999 to the end of 2007 he was on the board of directors of the Internet Corporation for Assigned Names and Numbers (ICANN), and from 2000 to 2007 its board of directors. Since September 2005 he has also been Vice President and Chief Internet Evangelist at Google . In this role, his job is to identify new techniques for improving Google services and to be a figurehead for the company.

Cerf worked as a visiting scientist for the NASA Jet Propulsion Laboratory on the Interplanetary Network (IPN), a future standard for communication between planets , the radio and laser connections used are extremely tolerant of signal loss.

Cerf appeared at a Federal Trade Commission workshop in November 2013 and identified the concept of privacy as a possible anomaly that will become increasingly difficult to reach.

At the annual meeting of the American Association for the Advancement of Science in San Jose in 2015, he expressed concern that future generations could suffer from amnesia due to the short shelf life of digital content: “If we do not set up a system that preserves data permanently, we can watch each other our digital memory gradually evaporates. "

1997 handed US President Bill Clinton him and Robert Kahn the National Medal of Technology , the highest technology award from the United States, and in 2005 gave George W. Bush them the Presidential Medal of Freedom ( Medal of Freedom ), one of the highest civilian awards in the United States. The two also share numerous other awards, including the IEEE Alexander Graham Bell Medal 1997, the Prince of Asturias Prize 2002 (with Tim Berners-Lee and Lawrence Roberts), the Turing Award in 2004 and the Charles Stark Draper Award Prize (with Leonard Kleinrock and Lawrence Roberts ), the introduction to the National Inventors Hall of Fame in 2006 , the Japan Prize in 2008 and the Benjamin Franklin Medal of the Franklin Institute for 2018 . In 2013, Cerf was among the first to receive the Queen Elizabeth Prize for Engineering .

Independent of Kahn, Cerf u. a. Received the EFF Pioneer Award in 1993 , the Computerworld / Smithsonian Leadership Award in 1997 and 2002 , the Marconi Fellowship Award in 1998 , the Living Legend Medal of the Library of Congress in 2000 and the IRI Medal in 2016. The People Magazine declared him in December 1994 to one of the 25 most fascinating personalities of the year.

For 2010 the World Wide Web was proposed for the Nobel Peace Prize. Since only institutions with personal representatives can be awarded, Vint G. Cerf was proposed together with Lawrence Roberts and Tim Berners-Lee.

He is honorary chairman of the IPV6 forum, which is committed to the faster introduction of IPv6 , and is or was a member of the board of directors. a. from Gallaudet University (since 1997), Nuance Communications (since 1999), and StopBadware.org . He also advised a. in the United States the National Library of Medicine , the Department of Education , the Court of Auditors , the National Security Agency , the National Science Foundation , as well as the United Nations Development Program , the Miter Corporation and the Salomon Brothers .

Cerf has been hard of hearing from childhood and has been dependent on a hearing aid since he was 14, which he says has shaped his interest in written communication, especially e-mail. He has been married to a deaf person since 1966 and has two sons with her. He advocates the concerns of the deaf and hearing impaired, for example he was on the board of the Fairfax Resource Center for the Hearing Impaired from 1987 to 1991 .

Cerf was technical advisor for the TV series Mission Earth - You Are Among Us , in which he also made a guest appearance as Chief of Staff to the US President in 1998.