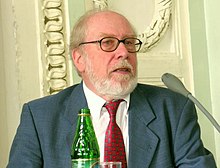 Niklaus Wirth (born February 15, 1934 in Winterthur ) is a Swiss computer scientist . Among other things, he developed several programming languages and wrote various textbooks. Wirth's law is named after him , according to which software slows down faster than hardware accelerates. 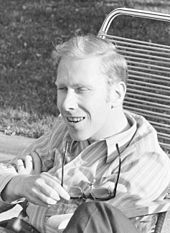 Niklaus Wirth as a young man

In 1959, Niklaus Wirth received his diploma as electrical engineer from the Swiss Federal Institute of Technology in Zurich and in 1960 his Master of Science from the Université Laval in Canada . In 1963 he received his doctorate from the University of California at Berkeley with a Fulbright scholarship under Harry Huskey on the generalization of the programming language Algol 60 .

Based on his dissertation, Wirth developed the Euler programming language together with Helmut Weber in Stanford in 1966 . Wirth designed the PL360 programming language, which was implemented on the IBM System / 360 in 1968 . He participated in the further development and generalization of the Algol language . In particular, he created the Algol W language in collaboration with Tony Hoare and contributed to the development of Algol 68 . Disappointed about the steadily increasing complexity of the drafts for this language, he defined and implemented the Pascal programming language practically single-handedly between 1968 and 1972 . He also expanded the formal language Backus-Naur-Form (BNF) , which was used for the notation of the syntax of Algol 60 , to the Extended Backus-Naur-Form (EBNF) . He later designed the Pascal successors Modula (1973–1976), Modula-2 (1977–1980) and Oberon (1985–1990), which, despite their clear concepts and simplicity, were not as successful as Pascal.

Following his guest stays at Xerox PARC , Wirth built the Lilith (1980) and Ceres (1986) computer systems as well as the associated operating systems. Despite their pioneering characteristics, attempts to market these workstations commercially have met with little success. Taking up his youth hobby, model flying, he equipped, among other things, several self-navigating model helicopters with Oberon-programmed on-board computers. From his stay at the Xerox in 1980, he was one of the first computer mice to come to Europe, which resulted in the world's first serial mouse from the Swiss company Logitech .

Wirth received numerous honors, including the ACM Turing Award in 1984 as the first and so far only German-speaking computer scientist (as of 2015), and the IEEE Computer Pioneer Award in 1988 .