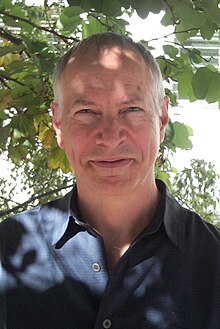 Robert "Bob" Endre Tarjan (born April 30, 1948 in Pomona , California ) is an American computer scientist . In 1986 he and John E. Hopcroft received the Turing Award for the design and analysis of algorithms and data structures .

He is a professor at Princeton University and works for the American company Hewlett-Packard .

Various algorithms are named after him:

Tarjan studied mathematics at Caltech in Pasadena, California, and completed his bachelor's degree in 1969. He moved to Stanford University , where he received his Masters in Computer Science in 1971 and his Ph.D. in 1972. in computer science with a minor in mathematics. His thesis on Efficient Planarity Algorithm was supervised by Robert Floyd , the lectures by Donald Ervin Knuth .

He was then a research fellow at Cornell University for a year , then a Miller Research Fellow for two years at the University of California, Berkeley , and a research fellow from 1974 to 1977 and then until 1980 associate professor of computer science at Stanford University. 1981 to 1985 he was an adjunct professor at New York University . Since 1985 he has been the James S. McDonnell Distinguished University Professor of Computer Science at Princeton University. From 1989 to 1994, and again since 2001, he is also Co-Director of the National Science Foundation Center for Discrete Mathematics and Theoretical Computer Science . In 1996 he was visiting professor at MIT .

At the same time, he began a career in industry in 1980, initially being a Member of Technical Staff at AT&T Bell Laboratories until 1989 , then a Fellow of the NEC Research Institute until 1997 , and then Chief Scientist of InterTrust Technologies until 2001 . In 2002 he was a brief Corporate Fellow of Compaq , and when it was taken over by Hewlett-Packard, he became Chief Scientist there, and from 2003 a Senior Fellow.

Among Tarjan's 25 doctoral students are the Germans Thomas Lengauer and Monika Henzinger .