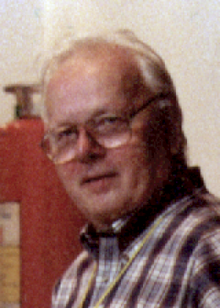 Kristen Nygaard (born August 27, 1926 in Oslo ; † August 10, 2002 ibid) was a Norwegian computer scientist and a pioneer in the field of programming languages .

Nygaard spent his youth on his uncle's farm, where he had to help ensure the family's survival during the war years. Nevertheless, he was introduced to the staff of the Institute for Astrophysics at the University of Oslo at the age of 14 . There he met the mathematician Jan V. Garwick and finally studied mathematics himself in Oslo from 1945, where he received his Candidatus realium degree in 1956. The title of his thesis was Theoretical Aspects of Monte Carlo Methods . During his studies he did his full-time military service at Forsvarets forskningsinstitutt (FFI, Research Institute of the Norwegian Armed Forces) as assistant to Jan V. Garwick, where he did calculations for the construction of Norway's first nuclear reactor and as head of the Computing Office he was in charge of Ole -Johan Dahl was. He stayed there after graduation and became head of Operations Research in 1957 . In 1959 he co-founded the Norsk Operasjonsanalyseforening (Norwegian Operations Research Association) and remained its first chairman until 1964. In 1960 he moved from the FFI to the Norsk Regnesentral (NR, Norwegian Computing Center), where he became research director in 1962 with the task of establishing an institute for computer science, OR and applied mathematics.

In 1974 Nygaard lectured on computer science and society at the University of Oslo. He was a professor in Århus (1975/76) and was later appointed to the University of Oslo (1977 to 1996), where he headed the computer science committee from 1984 to 1985. In 1987 he was visiting professor at Stanford University , visiting scholar at Xerox PARC and advisor to Apple's Advanced Technology Group . As the successor to Simula, he developed the programming languages ​​Delta and Beta with others . In 1984 he left the NR, but became its member again in 1996. From 2001 he also worked for the newly founded Simula Research Laboratory .

The Norwegian King appointed him and Ole-Johan Dahl in 2000 as commanders of the Order of Saint Olav . In November 2001 he was awarded the IEEE John von Neumann Medal for his role in the development of OOP together with Dahl , and in February 2002 with the ACM Turing Award , the “Nobel Prize in Computer Science”.

He was also a member of the Norwegian Academy of Sciences and an honorary member of the Object Management Group and received honorary doctorates from Lund University and Ålborg Universitetscenter .

Nygaard was also politically active, for example he was a board member and strategy committee chairman of the left-wing party Venstre in the mid to late 1960s , later active in various committees of the Arbeiderpartiet , and from 1988 a leading member of the Nei til EU campaign , which was supposed to prevent Norway's accession to the European Union . Norway voted against accession to the EU in a referendum in 1994. Nygaard promoted IT skills in trade unions, was involved in nature conservation organizations and represented Norway on information technology issues at the OECD . In 1990 Nygaard received the Norbert Wiener Award for Social and Professional Responsibility .

His marriage to his wife Johanna (1951) resulted in three children.

He died of a heart attack in Oslo at the age of 75 . A few weeks earlier, his friend and colleague Ole-Johan Dahl had also died. The Association Internationale pour les Technologies Objets has been awarding the Dahl Nygaard Prize annually since 2005 in their memory.