Collane of the Order of Saint Olav 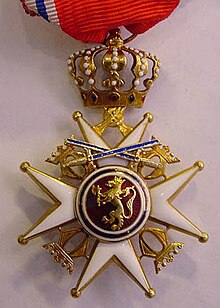 Breast star to the Grand Cross

The Sankt-Olav-Orden ( no. Den Kongelige Norske St. Olavs Orden ), also the Royal Norwegian Order of Saint Olav or just the Olav-Order , was founded on August 21, 1847 by King Oskar I of Sweden and Norway . It was named after the canonized King Olav II. Haraldsson of Norway and is the third highest order in Norway. The award is given to nationals and foreigners for outstanding services to the king and fatherland, as well as for bravery and outstanding achievements in art and science.

Originally the order consisted of only three classes:

On July 19, 1873, the commander's degree and on March 17, 1890, the knight's degree were divided into two further classes. The division into

The order also includes a necklace that the king can bestow on bearers of the Grand Cross.

The medal consists of a gold bordered Maltese cross, graduated in size in the different classes . The white-enameled cross has gold balls at the eight tips. In the middle there is a red, blue and white bordered medallion. The obverse depicts the crowned golden lion of Norway with the battle ax of St. Olav and the reverse shows the royal motto of the founder RET OG SANDHED (Law and Truth).

The commanders and knights who received the Order for Military Merit wear two gold crossed swords under the crown. The ribbon is red with white-blue-white stripes. It is worn by the grand cross over the right shoulder to the left hip, by the commanders around the neck and by the knights on the left chest.

With the exception of members of the royal family and heads of state, the Order of St. Olav is only awarded to Norwegian citizens today.

If a class of the Order of St. Olav has been awarded for military merit, this can be recognized by two blue enameled, crossed swords under the royal crown on the cross. There are special provisions for the return of the medal (after the death of the wearer or when promoted to a higher medal class).

Proposals are to be addressed to the king and forwarded to the order chancellery. The Order Council, appointed by the King on the proposal of the Prime Minister, consists of the Chancellor, Vice Chancellor, Treasurer (head of the court) and three council members who represent the regions of southern, central and northern Norway. The Order Council advises the King on all questions relating to the award of medals. The order's chancellery is the secretariat of the order.