from Wikipedia, the free encyclopedia
This is the spotted version , flagged on July 2nd, 2020 . There is 1 pending change that has yet to be viewed.

The university campus is located between Hengelo and Enschede . The university is a campus university . Originally the university was a technical college, today numerous non-technical courses are also offered, such as B. Communication Studies , European Studies and Psychology . The UT is linked to the Technical Universities of Eindhoven , Delft and Wageningen in a federation 4TU and is a partner in the European Consortium of Innovative Universities (ECIU).

On December 1, 1961, the Dutch Parliament decided to set up a third technical university in the Netherlands. One of the main goals of the new university should be to train new engineers for industry in the east of the country.

After the decision of Parliament, construction began. On September 14, 1964, the Twente University of Technology (THT) was officially opened by Queen Juliana and Prince Consort Bernhard . The THT started its studies with four departments: General Sciences, Mechanical Engineering , Electrical Engineering and Technical Chemistry .

In 1966 the THT had 634 students, including only 14 women. A year later, the college applied for approval to enter a medical school. However, the contract was awarded to Maastricht University . Over the years, new courses were added: Applied Mathematics , Technical Physics and Industrial Engineering (1968), Administrative Science (1973), Applied Pedagogy (1977), Technical Computer Science (1980), Civil Engineering (1991), Applied Communication Science and Business Informatics (1993). In 1985 a "branch" was founded in Leeuwarden in Frisia , where students could complete their first year of study. Twenty years later the "Vestiging Friesland " was closed again.

The university has had its current name since 1986.

In the summer of 2002, large parts of the university's computer network were destroyed in a fire. The building was reopened a year later. 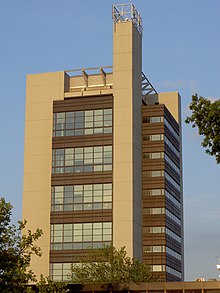 The university offers the following bachelor's and master's degrees (per faculty):