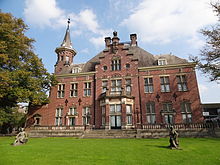 Huize Heyendael, today the headquarters of the university

In 1655 an earlier university was founded in Nijmegen under the name Kwartierlijke Academie Nijmegen , but its existence was limited to a short period of time due to unfavorable events. In 1665 the city and with it the university were ravaged by the plague , and in 1672 Nijmegen was occupied by French troops. The university was finally closed in 1679 for lack of money after losing its last professor, Gerhard Noodt .

During the Second World War, the university suffered badly: on February 22, 1944, almost the entire city center of Nijmegen was almost completely destroyed by mistaken Allied bombing, including many university buildings. Since the then rector Bernardus Hubertus Dominicus Hermesdorf (as the only rector of a Dutch university) refused to have all students sign a declaration of loyalty to the German occupation forces, the closure was forced in April 1943.

After the war, the former Heyendaal estate in the south of the city was purchased to build a new campus. The Medical Faculty was the first to move to the new site in 1951. In 2004 the name was changed to the current name. (named after the former bishop Radbod of Utrecht ). Years of growth and the construction of many new faculty and research facilities follow. In 2013 the university celebrated its 90th anniversary. In the course of the celebrations, u. a. Federal Chancellor Angela Merkel was awarded the honorary doctorate “because of her international social merits, her commitment to Europe and her commitment to science”.

Withdrawal of ecclesiastical recognition of the Catholic Theological Faculty

The Congregation for Catholic Education withdrew the Catholic Theological Faculty in 2006 the right canonical (ie: from the Roman Curia recognized) title to lend. This decision is justified by the fact that the Catholic Faculty has not complied with the request of the Roman Curia to adapt its statutes to church guidelines since 1980. In canon law it is stated that every appointment of a theology professor requires the approval of the church authority. The university had viewed this duty as a restriction on its academic freedom. The withdrawal of ecclesiastical recognition meant that theologians trained at the university could no longer become Catholic priests or pastoral officers . The Faculty of Theology and Religion - Tilburg University remained the only recognized academic priestly training in the Netherlands .

The coat of arms was designed by the goldsmith's workshop of the Brom family from Utrecht when it was founded. The lower part shows the coat of arms of the Catholic Church in the Netherlands; the dove above is the symbol of the Holy Spirit. The shield is crowned by the crown of Charlemagne . The coat of arms is surrounded by the motto In Dei Nomine Feliciter , which is attributed to St. Willibrord .

Erasmus building of the Faculty of Humanities

Main entrance of the university hospital

Faculty Library of the Medical Faculty

107 courses (40 Bachelor's and 67 Master's courses) are taught at seven faculties:

The following research institutes are subordinate to the faculties:

The Max Planck Institute for Psycholinguistics , one of the few institutes of the Max Planck Society outside Germany, is also located on campus .

The Benedictine Center for Liturgical Studies (BCL), which is operated jointly with the Sint-Willibrordsabdij in Doetinchem , is affiliated with Radboud Universiteit .

According to the CHE university ranking published by the newspaper The time , the RU Nijmegen in the "overall study situation", "care" and " citations per publication ," in some programs, including, for example, biology , chemistry , human medicine and psychology , the Assigned to the top group of the examined European universities. In the worldwide QS World University Ranking, the RU Nijmegen is in 138th place (2011). The Nijmegen scientists Anne Cutler (1999), Henk Barendregt (2002), Peter Hagoort (2005), Theo Rasing (2008), Heino Falcke (2011), Mike Jetten (2012) and Mikhail Katsnelson (2013) were awarded the Spinoza Prize excellent. Professor Sir Andre Geim and former PhD student Sir Konstantin Novoselov won the 2010 Nobel Prize in Physics .