Often these are numbers represented in binary form, for example in coding theory . In this case, the comparison can be made mathematically by an XOR operation and counting the resulting ones. However, there are also important applications for other number systems or alphabets.

is a finite alphabet as well , and two of-character words . The Hamming distance between and is defined as:

It should be noted that the Hamming distance is also a metric in the code space.

Hamming distance of a code

The Hamming distance of a code is the minimum of all distances between different words within the code.

A code consists of the following three words:

The Hamming distance between and is 2.

The Hamming distance between and is 1.

The Hamming distance between and is 3.

The smallest of the three distances is 1, so the Hamming distance of the code is also 1.

The Hamming distance is important if you want to develop codes that enable error detection ( EDC ) or correction ( ECC ).

For every 1-bit error can be detected. In order to also be able to correct the errors, the Hamming distance must be increased to at least , where stands for the number of correctable bit errors.

With , all 1-bit errors can be recognized and corrected. If 2-bit errors occur, these may be incorrectly “corrected”, since the incorrect word may have a distance of 1 from another valid code word.

Finding the Hamming distance of a code

The manual determination is best done with the Karnaugh-Veitch diagram . There you enter a cross for each code value that occurs. If at least two crosses are next to each other horizontally or vertically, with opposite edges coinciding, then the Hamming distance = 1.If two crosses are either only diagonally next to each other or horizontally or vertically to each other with a field in between, the Hamming distance = 2 The adjacent Karnaugh-Veitch diagram for 4 bits (gray fields are cyclical repetitions) shows the distance between a code value and a given (cross). So you can z. B. recognize that with 4 bits there are only two values ​​with Hamming distance = 4, namely a complementary pair.

In binary code, the Hamming distance between two code words can and the ones in the result are determined by (a XOR b) and the counting.

When transferring data, it must be ensured that information is not falsified or that changes to the data are at least noticed (detection of n-fold errors) and perhaps can be corrected.

In the following example, a rotary switch has four setting options. These are transmitted electronically as a binary number (code word) to a recipient: 00, 01, 10, 11; The receiver receives the code word, but has no other means of checking or recognizing the switch position. In technical applications, this is already the case when the receiver is a microcontroller and the transmitter consists of the sensors within a switch.

In this scenario, the receiver has no way of recognizing corruption in the transmission or a defect in the switch (e.g. defective sensors in the switch). With the help of the Hamming distance and corresponding codes, a way is to be found to detect errors in the transmitter or in the line.

The Hamming distance between the four mentioned values ​​00, 01, 10, 11 is in each case 1, i.e. H. if only one bit is reversed due to an error, the receiver will receive a different but equally valid code word. If a 00 to 01 is falsified, the recipient cannot recognize the error from the message alone, because both the intended and the falsified value describe a valid position of the switch.

To improve the situation, the sender and receiver first agree to only use certain (but longer) code words and to define their meaning in a table. For this purpose, both can select the code words 001, 010, 100, 111, for example, which each have the Hamming distance of 2 to one another - the other four code words with a length of three bits are not used.

In the case of a single erroneous bit (single error), none of these four code words 001, 010, 100, 111 changes into one of the other three valid code words. The recipient recognizes when z. B. a 011 arrives that an error must have occurred. A code with the Hamming distance 2 cannot be corrected reliably, as this example shows: The 011 could have been created by reversing just one bit from one of the three valid code words 001, 010, 111.

The double error opens up the possibility of an error, as can be shown with the example of 01111: If 01111 should have arisen from a double error from 01100, but the receiver considers it to be a single error and corrects it, then the 01100 actually intended by the sender becomes 01100 due to the double error a 01111 and incorrectly a 01011 due to the correction of the recipient (because of the assumption of a single error).

Because of the already mentioned decreasing probability of multiple errors (n-fold errors) with increasing n, a Hamming distance of 4 (detection of triple errors) to 5 (correction of double errors) is sufficient in most applications.

The required length of the code word depends on the required Hamming distance and the number of possible switch positions and is shown in the table above. There you can see, for example, that at least 8 bits have to be transmitted for 20 different positions of a switch if all 20 code words are to achieve at least the Hamming distance ≥ 3 from one another.

Representation of the bit string in a hypercube

The idea of ​​the Hamming distance can be well represented with the help of hypercubes . A hypercube is the generalization of a three-dimensional cube on the dimension . Each node in the figure corresponds to a bit combination that can also be understood as a coordinate specification in space. The minimum number of edges that have to be traversed in order to get from one valid word of a code to another valid word of the code corresponds to the Hamming distance. 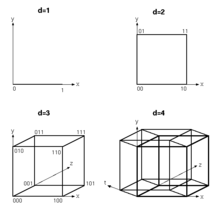 The minimum distance between two adjacent code words is of interest for the construction of a code which can correct errors in bit positions for useful information . In the case of block codes with a fixed alphabet, the singleton limit , the Hamming limit (keyword t-perfect) and the Plotkin limit provide more general information about the maximum minimum distance.

If all 1-bit errors are to be correctable, that is , it follows by inserting and changing . With you can only correct 1-bit errors, you can recognize 2-bit errors as errors, but neither correct them nor reliably differentiate them from 1-bit errors. Error correction usually turns 2-bit errors into 3-bit errors.

For each code, the Hamming distance must be at least 3 so that errors can be corrected at all.