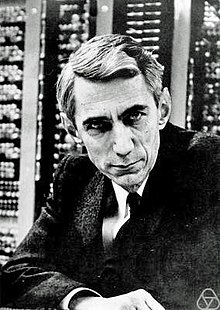 Claude Elwood Shannon (born April 30, 1916 in Petoskey , Michigan , † February 24, 2001 in Medford , Massachusetts ) was an American mathematician and electrical engineer . He is considered the founder of information theory .

Claude Shannon was born in a hospital in Petoskey , Michigan and grew up in nearby Gaylord , their parents' residence. In some biographies, Gaylord is therefore incorrectly stated as the place of birth. His father was a judge, his mother a language teacher of German origin. During his high school years he worked as a messenger for the Western Union .

He followed his sister Catherine to the University of Michigan in 1932 . She graduated from mathematics that year, and he began studying electrical engineering and mathematics. In 1936 he moved with a degree in mathematics and electrical engineering at the MIT . In his final thesis for Master in Electrical Engineering (1937), A Symbolic Analysis of Relay and Switching Circuits , he used Boolean algebra to the design of digital circuits. The work arose from the analysis of the relay circuits in the differential analyzer analog computer by Vannevar Bush (Dean of Engineering at MIT), which Shannon programmed for users. In 1940 he earned his doctorate in mathematics with a thesis on theoretical genetics (An Algebra for Theoretical Genetics) at MIT.

After a short stay as a researcher at the Institute for Advanced Study in Princeton , New Jersey , he joined AT&T Bell Labs, also located in New Jersey, as a mathematician in 1941 . There he met Mary Elisabeth Moore, technical assistant at the Microwave Research Department . They married in 1949 and had two sons and a daughter.

After taking up a visiting professorship at MIT in 1956, he moved there entirely in 1958, as Donner Professor of Science . In 1978 he was at MIT emeritus . He maintained his professional relationship with Bell Labs as a consultant until 1972. In the last years of his life he suffered from Alzheimer's disease , from the consequences of which he also died.

In 1948 he published his groundbreaking work A Mathematical Theory of Communication (German mathematical foundations in information theory ). In this article, he concentrated on the problem under which conditions information encoded by a transmitter and transmitted through a disturbed communication channel can be restored at the destination, i.e. decoded without loss of information. He was able to successfully apply the concept of entropy, known from physics, to information theory.

At the same time he published the article Communication in the presence of noise ("Message transmission in the presence of background noise"), in which he presented the representation of frequency-limited functions by the cardinal series according to John Macnaghten Whittaker (1929 and 1935) with considerations about the maximum data rate, especially by Harry Nyquist , linked to a theory of channel capacity in digital signal transmission. Before him, but without his knowledge, Vladimir Alexandrowitsch Kotelnikow published an identical result in 1933. Accordingly, the sampling rate for a signal must be at least twice as high as the highest frequency it contains in order to be reconstructed into an analog signal without loss of information ( Nyquist-Shannon sampling theorem ).

Another noteworthy article appeared in 1949, Communication Theory of Secrecy Systems , in which Shannon clarified the formal foundations of cryptography and thus raised it to the rank of a science in its own right.

Shannon was eclectic and creative; he is said to have juggled around on a unicycle in the corridors of Bell . Rand products to his professional activities include a juggling engine rocket-powered Frisbees , motorized Pogostöcke , a machine for reading of thoughts , a mechanical mouse ( Theseus , 1950), which by means of a simple memory consisting of a relay circuits in labyrinths could orient, and already in the 1960s an early chess computer . A work from 1950 already deals with chess programs. The work was influential and led to the first game of chess on computers on the MANIAC machine in Los Alamos in 1956. He also built the " ultimate machine ", a box with a switch that a mechanical hand turned "off" after one turned it on. The unit of information content of a message, the Shannon , was named after him.

In the mid-1960s he began to be interested in financial transactions and gave several well-attended lectures about it at MIT (one of his listeners was Paul Samuelson ). He proposed a process known today as Constant Proportion Rebalanced Portfolio in order to make a profit from random fluctuations in the market (after each transaction the capital is divided into exactly two halves, one for speculation, the other cash reserve).

After AT&T was split up in 1996, most of Bell Labs was added to the new Lucent Technologies company . AT & T's research laboratory in Florham Park , New Jersey, was named AT&T Shannon Laboratory in his honor .

His research results in the area of Boolean algebras include the inversion theorem and Shannon's expansion theorem .

In his hometown Gaylord, a park is named after him, in which his sculpture is located.