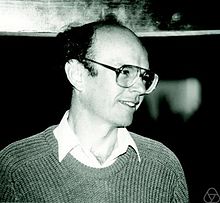 Neil Sloane studied at Melbourne University (bachelor's degree in 1960) and at Cornell University , where he received his master's degree in 1964 and his PhD with Frederick Jelinek (and Wolfgang Fuchs ) in 1967 ( Lengths of Cycle Times in Random Neural Networks ). From 1967 he was Assistant Professor in the Faculty of Electrical Engineering at Cornell University and from 1969 at what was then AT&T Bell Laboratories , where he has been "Technology Leader" since 1998 (now in Florham Park , New Jersey). After over forty years, he retired from Bell Labs. He also teaches at Rutgers University . He lives in Highland Park, New Jersey.

Sloane dealt with coding theory , where he is considered one of the leading experts. His work on error-correcting codes , among other things, was used in B. in communication in underwater fiber optic cables and in high-speed modems. He is the author of a standard work with Florence MacWilliams on error-correcting codes and with John Conway on packing of spheres, lattices and codes (the closest packing of spheres is important for the development of efficient codes). He is also known for his On-Line Encyclopedia of Integer Sequences (OEIS), which he started in 1964 (it started from questions in his dissertation on neural networks).

In 1979 he received the Chauvenet Prize . He received the IEEE Centennial Medal, the Claude E. Shannon Award in 1998 and the Richard W. Hamming Medal in 2005 . Since 1998 he has been a member of the National Academy of Engineering and an AT&T Fellow. For 2013 he was awarded the George Pólya Award . He is a fellow of the American Mathematical Society .

In 1993 he edited the collected works of Claude Shannon with Aaron D. Wyner .

Sloanes Gap , a recognized gap in the frequency distribution of the numbers in all episodes of the OEIS , was named after him .

He is also an avid rock climber and has written a guide to climbing routes in New Jersey (with Paul Nick Rock Climbing New Jersey , Falcon Press, 2000).