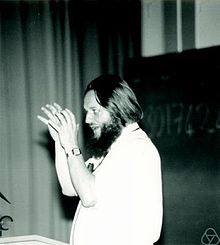 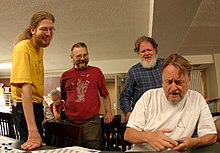 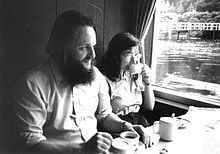 John Horton Conway was interested in mathematics as a child and, at the age of four, was able to enumerate the powers of 2 based on his mother's memories. He studied mathematics at Gonville and Caius College, Cambridge University and graduated in 1959 with a bachelor's degree. He then did research under Harold Davenport on additive number theory , where he proved in Waring's problem . The work was supposed to be his dissertation, but since Conway hesitated too long with the publication, Chen Jingrun , who proved the theorem at the same time, came before him with the publication. In 1964, Conway became a college fellow and lecturer . In 1967 he received his doctorate from Davenport, albeit with a thesis on logic and set theory (Homogeneous ordered sets), which he had dealt with for a while after initial research in number theory before he turned to group theory in the 1960s . With the publication of the Atlas of finite groups in 1984, Conway's engagement with this topic came to a certain conclusion. He then switched to geometry, especially to packing of spheres, on which he and Neil Sloane wrote a monograph that appeared in 1988. Conway stayed in Cambridge until 1986 when he was appointed "John von Neumann Professor" at Princeton University . After spending the last two years in a nursing home since suffering a severe stroke, he died in New Brunswick in 2020 of complications from a SARS-CoV-2 infection.

He was married three times and had seven children. The Coxeter biographer Siobhan Roberts wrote his biography, which was published under the title Genius at Play in August 2015 by Bloomsbury Publishing.

Conway was known for his work on combinatorial game theory , including the books on numbers and games (Original: On Numbers and Games ), number magic (The Book of Number) and, as a major work, Winning: Strategies for mathematical games ( Winning Ways for Your Mathematical Plays, together with Elwyn Berlekamp and Richard Kenneth Guy ). He created numerous math games, including the famous Game of Life and the game Sprouts . He discovered the surreal numbers (the title of a book in which Donald Knuth popularized these works), a number definition analogous to the Dedekind cut , which also includes games and infinite cardinal numbers .

His theory of surreal numbers arose out of his interest in Nim-like games (Impartial Games), about which he was working on a book with Berlekamp and Guy in the late 1960s, and he also played Go privately in Cambridge, for example , even if he used his own words wasn't very good at it. In 1970 he presented his concept of combinatorial games as numbers at Caltech and in 1972 published a research paper on this from the University of Calgary (All numbers great and small). He wrote his book On numbers and games (1976) about it , which he essentially completed in a week of intensive work, but which also led to a temporary annoyance with his colleague Berlekamp, ​​who said that Conway was working separately on their joint book project with Guy published without a vote, and threatened with legal action. They later became friends again, and Conway wrote the book Winning Ways with Berlekamp and Guy (who belonged to an older generation than Conway and whom he originally met through his son Michael Guy, a mathematician friend of his in Cambridge) . Donald Knuth found out about his theory from Conway at a conference and also wrote the popular science book On surreal numbers in a hotel room in Norway during a week , in which the theory was presented to a wider public for the first time.

Conway has enriched " entertainment mathematics " in the broadest sense with numerous other original contributions. For example, he invented the Doomsday method for the simple calculation of the day of the week , the Conway sequence named after him and a “prime number machine” (formula that has all prime numbers and only these as a solution) (see FRACTRAN ). He also developed the LUX method for creating magic squares.

Conway discovered three new sporadic finite simple groups in the late 1960s, the Conway groups named after him, when he was studying the leech lattice. He also simplified the construction of the last and largest sporadic group found, the " monster " (but preferred to be called "friendly giant" by the discoverer). In a famous work with his doctoral student Simon Norton from the late 1970s, he pointed to the relationship between the (dimensions of the irreducible) representations of the monster and the expansion coefficients of the elliptical module function , called "monstrous moonshine" after the title of their essay (they followed a Observation by John McKay ). Many of the suspected connections were later proven by Conway's PhD student Richard Borcherds , who received the Fields Medal for it . With his research group in Cambridge, Conway published the Atlas of Finite Groups .

With Neil Sloane , he published the monumental work Sphere packings, lattices and groups in the Springer series Grundlehren der Mathematischen Wissenschaften (3rd edition, 1999) in 1988 , in which many of his own original research contributions on the theory of lattices and spherical packings and, related to this, the coding theory are summarized.

With Richard Kenneth Guy , Conway published the Book of numbers, in which many results of number theory (and also many games) are discussed in a semi-popular manner. He also wrote books on quadratic forms (The sensual (quadratic) form) and algebras (Quaternions and octonions).

An example of problems for which he offered a price is the construction of the polyhedra he called holyhedron (each side has at least one hole, the edges of the holes must not have a point in common, and also none with the edges of the holyhedron sides). Conway offered $ 10,000 for a solution, but divided by the number of pages in the Holyhedron. The first solution by Jade P. Vindon from 1999 had 78,585,627 pages and the prize money was thus negligible. In 2003, computer graphic artist Don Hatch found a Holyhedron with 492 pages.

When asked about his most significant achievements, in 2013 he highlighted his discovery of surreal numbers and his proof of the Free Will Theorem in quantum mechanics with Simon Cooking and less his work in group theory, for which he was best known. The Free Will Theorem was proven by Conway and Cooking 2004 and states that if the experimenter has freedom of choice ( free will, possibility of non-predetermined behavior), this also applies in a certain sense to all elementary particles (under weak conditions).

Conway's work has received numerous mathematical awards. In 1987 he received the Pólya Prize of the London Mathematical Society , the Berwick Prize in 1971 , the Nemmers Prize for Mathematics in 1998 and the Leroy P. Steele Prize of the American Mathematical Society in 2000 . In 1981 he became a Fellow of the Royal Society , and in 1992 he was elected to the American Academy of Arts and Sciences . In 1994 he gave a plenary lecture at the ICM in Zurich (with the title Sphere Packings, Lattices, Codes and Greed ). He was invited speaker at the ICM in Helsinki in 1978 (Arithmetical operations on transfinite numbers) and in Nice in 1970 (The subgroup structure of the exceptional simple groups).

Since he published the work On the distribution of values ​​of angles determined by coplanar points with Paul Erdős (and Hallard T. Croft and Michael JT Guy) in 1979 , he has the Erdős number 1.