This article covers the year. For further meanings see 2020 (disambiguation) .

The year 2020 is the current leap year with 366 days. It started on Wednesday January 1st and ends on Thursday December 31st . So far, the year has been dominated by the global COVID-19 pandemic , which has resulted in numerous social and economic restrictions.

After 35 years, the last episode of Lindenstrasse ran in March 2020.

The Summer Olympics planned for 2020 in Tokyo have been postponed to 2021 due to the coronavirus pandemic. 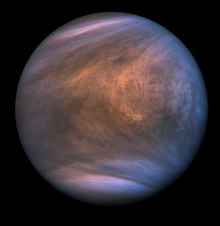 September 14: Scientists report the discovery of monophosphane in the atmosphere of Venus , suggesting life there .

The announcement of the Nobel Prize winners for 2020 took place from October 5th to 12th. Due to the COVID-19 pandemic , the awards were given in virtual ceremonies on December 10, the anniversary of Alfred Nobel's death . Berit Reiss-Andersen , the chairman of the Norwegian Nobel Committee in Oslo , congratulated from Rome switched- WFP -directors David Beasley . In the late afternoon followed with a pre-recorded greeting from King Carl XVI. Gustaf in Stockholmthe virtual ceremonies for the other prize categories. The winners were not switched on, but were shown when the certificates and medals were handed over by Swedish diplomats in their respective homeland. If possible, the unusual large gala buffet, usually the highlight in the Swedish social calendar, should be made up for at the next award ceremony in 2021.

In 2020, the global COVID-19 pandemic with the novel coronavirus SARS-CoV-2 began in Wuhan , China . On January 30, 2020, the WHO classified COVID-19 as a health emergency of international concern , and on March 11, the disease was officially declared a pandemic. At the same time, numerous states around the world responded with restrictions on public life such as curfews and the cancellation of major events in order to slow the spread of the virus.

By early December 2020, the number of infected people rose to over 66 million worldwide; over 1.5 million sick people had died at this time. With just under 14.6 million infected people and over 280,000 deaths at this point in time, the USA accounted for almost a fifth of the world's registered cases and the most deaths worldwide. However, these are only the confirmed case numbers, without the unreported number . Calculations of excess mortality by the British business magazine The Economist have shown that by August 2020 around 1.5 to 2 million people have died from the effects of COVID-19 and that between 500 and 730 million have become infected. That is 9.3% of the world population.

The so-called “second wave” spread massively at the beginning of autumn.

The organ of the World Health Organization (WHO), the World Health Assembly (WHA) , declared 2020 the International Year of the Nursing and Midwife, as this year marks the 200th birthday of Florence Nightingale .

For the detailed list of the deceased see Nekrolog 2020 .

(The years refer to the year of admission)