The title of this article is ambiguous. Further meanings are listed under Oskar Fischer (disambiguation) . 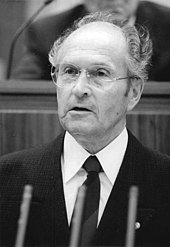 After his return to Germany he joined the FDJ and the SED and was initially a functionary of the FDJ district association Spremberg and the FDJ state association Brandenburg . After the state elections in the GDR in 1950 , he was a member of the Brandenburg state parliament and chairman of the committee for youth, culture and popular education until 1951 . From 1951 to 1952 he was secretary of the Central Council of the FDJ and secretary of the World Federation of Democratic Youth , since 1952 also a member of the World Youth Council .

From 1955 to 1959, Fischer was the GDR's ambassador in Bulgaria , and then a sector leader at the SED Central Committee . From 1962 to 1965 he studied at the party college of the CPSU in Moscow (graduate social scientist ). He was then Deputy Minister, State Secretary and, from 1975 to 1990, as successor to Otto Winzer, Minister for Foreign Affairs. He was also a member of the Central Committee of the SED from 1971 to 1989 and a member of the People's Chamber from 1976 to 1990 . In 1973, Fischer received the Patriotic Order of Merit , in 1979 the Gold Medal for the Patriotic Order of Merit and in 1983 the Karl Marx Order . He kept the office of Minister for Foreign Affairs in the Modrow government . After the first free election on March 18, 1990 , Fischer handed the official business over to Markus Meckel (SPD) on April 12, 1990 . The then 67-year-old then withdrew completely into private life for a decade; He declined interview requests.

In 2000, Gabi Zimmer , the PDS boss at the time, appointed Fischer to the PDS council of elders. Before the 2002 Bundestag election , he participated in a PDS call for elections.

Ambassador of the GDR in Bulgaria

Minister for Foreign Affairs of the German Democratic Republic