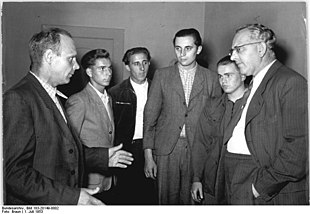 Rudolf "Rudi" Jahn (born November 4, 1906 in Paunsdorf near Leipzig , † September 30, 1990 ) was a German communist resistance fighter against National Socialism . He was a member of the People's Chamber of the GDR and from 1949 to 1952 Prime Minister of the State of Brandenburg .

Rudolf Jahn was born on November 4, 1906 as the son of a family of metal workers in today's Leipzig district of Paunsdorf. After attending primary school from 1913 to 1921, he completed an apprenticeship as a cabinet maker and cabinet maker by 1925. Jahn joined the SAJ right at the beginning of his apprenticeship . In 1922 he became a member of the German Woodworkers Association and in 1923 a member of the KJVD . In 1924 and 1925 he also held the position of head of the youth section of the German Woodworkers' Association. Jahn was actively involved as a young communist. Because of his participation in the congress of the working people in Eisenach in 1924 and in the armed fighting in the spring of 1924 over Bloody Sunday in Halle , two investigations into high treason were initiated against him. After completing his training, he went on a hike until 1928, stopping off in Denmark, Sweden, Switzerland and Yugoslavia. After returning to Saxony, Jahn became a member of the KPD , but initially acted as organizational leader of the KJVD district of West Saxony, before he was delegated to the International Lenin School in Moscow from January to August 1929 by decision of the KJVD Central Committee . After his return to Germany, Jahn initially took over functions for the KPD in the Leipzig area, before he worked from June 1931 as secretary for agitation and propaganda for the KPD district leadership in Saxony in Dresden and then in Leipzig.

On May 24, 1933, Jahn was arrested in Leipzig and spent so-called “ protective custody ” until his release on November 9, 1933, including in the Colditz concentration camp in the Dresden remand prison. He was arrested again on February 24, 1934, only to be sentenced to 18 months in prison on April 13, 1934 by the 1st Criminal Senate of the Dresden Higher Regional Court for “preparation for high treason”. Jahn served his sentence in Waldheim prison . After his release in September 1935, Jahn was placed under police supervision and initially worked as a construction worker on the Reichsautobahn, later as a parquet layer and company carpenter. When the war began on September 1, 1939, Jahn was arrested again and remained in the Buchenwald concentration camp until the end of the war .

After the liberation from the concentration camp, Jahn returned to Leipzig and immediately became involved again in the KPD. He first became a member of the leadership of the KPD sub-district of Leipzig, and in autumn 1945 he became a member of the KPD district leadership of Saxony. At the same time, Jahn was one of the founders of the People's Solidarity and was elected 1st State Secretary of this mass organization for Saxony in September 1945. He held this office until the spring of 1946. Then Jahn moved to the Saxon state board of the FDGB until August 1948 , where he headed the secretariat for training and education. In August 1948, the FDGB delegated him to Brandenburg in order to replace Franz Moericke as chairman of the FDGB state board of Brandenburg from August 15 . In December 1949, Rudolf Jahn was elected Prime Minister of the State of Brandenburg by the Brandenburg state parliament as the successor to Karl Steinhoff , who was dismissed in October 1949 . He remained so in the second electoral period until the dissolution of the states in the summer of 1952. At the same time, Jahn sat from October 1949 to 1954 as a member of the SED parliamentary group in the People's Chamber .

After the de facto abolition of the office of the Brandenburg Prime Minister, Jahn was sent to his home in Saxony. He became the first chairman of the newly created council of the district of Dresden and remained so until November 1958. After appropriate preparation, Jahn went to the diplomatic service of the GDR in February 1959. He became ambassador to the People's Republic of Bulgaria. In January 1963 he returned to the GDR and headed the 6th European Department in the GDR Foreign Ministry. In 1968 Rudolf Jahn retired for health reasons, but continued to do voluntary work, including in the committee of the GDR's anti-fascist resistance fighters .

Jahn died shortly before the end of the GDR on September 30, 1990 and was buried in the Goethe cemetery in Potsdam-Babelsberg .

First chairwoman of the FDGB state board Brandenburg

Prime Minister of the State of Brandenburg

Chairwoman of the Dresden District Council

Ambassador of the GDR in Bulgaria