Lee Teng-hui ( Chinese  李登輝 , Pinyin Lǐ Dēnghuī ; born January 15, 1923 in Sanzhi , Taihoku Prefecture, Taiwan , Japanese Empire (today: New Taipei , Taiwan ); † July 30, 2020 in Taipei , Taiwan) was a Taiwanese Politician . From 1988 to 2000, he was President of the Republic of China in Taiwan and Chairman of the Kuomintang . Lee was the first Taiwanese-born politician to hold these positions.

Lee was born into a Hoklo family during the Japanese rule of Taiwan in what is now the Sanzhi District of Taipei (then a village outside Taihoku City ) . The young Lee achieved very good school results and received his secondary education in Japanese and partly directly in Japan. The Japanese administration promoted the Japaneseization of Chinese names in Taiwan, and on February 11, 1940, Lee was given the Japaneseized name Iwasato Masao (岩 里 政 男).

After studying in the USA, Japan and Taiwan, Lee received his doctorate in the USA in 1968 in the field of agricultural sciences . He then returned to Taiwan and joined the Kuomintang in 1971. Between 1972 and 1978 he was a member of the government as a minister without portfolio ; from 1978 to 1981 he was mayor of the capital Taipei . Lee then became provincial governor of Taiwan before being elected Vice President of the Republic of China by the National Assembly in 1984 . 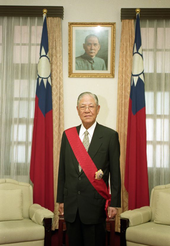 After the death of President Chiang Ching-kuo in 1988, he succeeded him. When he attended his old university in the USA in 1995, a conflict arose with the People's Republic of China . As president, Lee continued the democratization begun by his predecessor. After an electoral reform, he became the first directly and democratically elected President of the Republic of China in Taiwan in the presidential election on March 23, 1996 with 54 percent of the vote.

In 1999, Lee's interview with Deutsche Welle caused a sensation when Lee was the first president to describe the relationship with the People's Republic of China as the relationship between two states and thus to shape the two-state theory in the area of ​​Sino-Taiwanese relations.

In the 2000 presidential election , he did not run again. Unrest within the Kuomintang, for which Lee was blamed, led to his resignation as party chairman in March 2000 and finally to Lee's expulsion from the party in December 2000. Since 2001 he has been a member of the Taiwan Solidarity Union , which he and his supporters founded , which, contrary to the line of the Kuomintang, campaigns for a formal declaration of independence for Taiwan. Prior to the 2008 presidential election in Taiwan, he declared his support for Democratic Progressive Party candidate Hsieh Chang-ting . Even before the 2012 presidential election , he openly declared his support for the pan-green coalition candidate Tsai Ing-wen .

In 2011, prosecutors brought charges against him for misappropriating public funds during his reign. After years of investigation, the Taiwan Supreme Court acquitted him in August 2014.

Possibly because of his school education in Japan, Lee took unusually friendly positions towards the former colonial power Japan, which the Taiwanese public did not always like, and even less so from official bodies of the People's Republic of China. He publicly stated that the Senkaku Islands claimed by Taiwan and the People's Republic of China were part of Japan. During a visit to Japan in 2007, he visited the controversial Yasukuni Shrine , which outside of Japan is often seen as a symbolic site of Japanese militarism and nationalism, and justified this by saying that he was on the Japanese side of his older brother, who was in the Battle of Manila in 1945 had fallen, had to show his respect. On another trip to Japan, he praised the achievements of Japanese colonial rule over Taiwan. He repeatedly dismissed reports of Japanese war crimes in China - for example the Nanking massacre - as "communist propaganda".

In 1961, at the age of 38, Lee was baptized and joined the Taiwan Protestant Church.

Presidents (Heads of State) of the Republic of China