Sun Yat-sen , also Sun Jat-sen ( Chinese 孫逸仙 / 孙逸仙, Pinyin Sūn Yìxiān , in China mostly孫中山 / 孙中山, Sūn Zhōngshān ; * November 12, 1866 , in the village of Cuiheng near Zhongshan , Guangdong Province , Chinese Empire ; † 12 March 1925 in Beijing , Republic of China ) was a Chinese revolutionary and statesman . He founded theJapanese exile in Tokyo formed the League of Tongmenghui , from which the Kuomintang (KMT) later emerged, and became the first provisional president of the Republic of China on January 1, 1912 , with which the more than two-thousand-year-old empire ended. After a few years in exile , he became president of the self-proclaimed national government in Canton (Guangzhou) in 1921 .

Sun's official name at birth is Sūn Wén (孫文 / 孙文, Sun Wen ). As is traditionally customary during the imperial era , the Chinese had additional names in addition to their maiden name , which were given by their parents at birth and later when they came of age or during education (see stage name or pseudonym for authors or the like), especially in educated families .

Note
All characters in the above table in long characters

Bust in front of the Chinese Garden in Vancouver , Canada 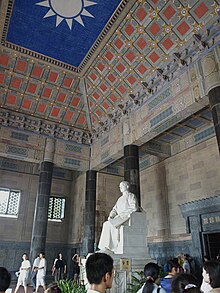 Sun Yat-sen Mausoleum in Nanking , PR China, with the Kuomintang flag on the ceiling 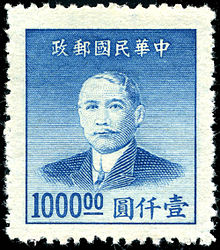 Portrait on a postage stamp , Taiwan 1949

Sun Yat-sen was on 12 November 1866 as the son of a peasant family in the village Cuiheng (翠亨村), county Xiangshan (香山縣 / 香山县), Guangdong ( southern China born). The district was renamed Zhongshan in his honor . About his origins, Sun said, “I am a coolie and the son of a coolie. I have always sympathized with the struggle of the people. "

According to a birth certificate issued by the Hawaiian Territory of the United States , he was born on November 24, 1870 in the Kingdom of Hawaii . This information is considered incorrect. Sun Yat-sen received this birth certificate in March 1904 while visiting Hawaii . It enabled him to stay legally in the United States, which would otherwise have been denied to him under the Chinese Exclusion Act of 1882.

In 1878, at the age of 13, he went to Hawaii for the first time and moved to live with his brother in Honolulu , who had already started there as a laborer and became rich as a trader. From 1879 to 1882 he studied at the Anglican Iolani School , until 1883 at the Punahou School. This first contact with Christianity shaped him deeply.

After his return to the village of Cuiheng, he smashed a god figure in the village temple to demonstrate his rebellion against the prevailing circumstances. For this he was banished from the village.

In the early 1880s, his sister Sun Mei sent him to Lolani School, which was under the direction of the British Anglican Church and was directed by Prelate Alfred Willis. Classes were held in English. Although Bishop Willis emphasized that no one would be forced to accept the Christian faith, the Sunday visit to the chapel was compulsory for the students. It was in this school that Sun Yat-sen first came into contact with Christianity, which made a deep impression on him. Harold Schiffrin wrote that Christian belief had a major impact on Sun's future political course.

Sun was later baptized in Hong Kong by an American missionary from the Congregational Church of the United States. His brother, however, disregarded this baptism.

His conversion to the Christian faith was linked to his revolutionary ideals, and also promoted by it.

Activity as a revolutionary

Sun began in 1887 at the Hong Kong College of Medicine for Chinese , which later in the University of Hong Kong came up, medicine to study where in 1892 he was one of the first graduates. He then worked as a doctor at the Kiang Wu Hospital in Macau . In medicine, Sun Yat-sen, guided by the Japanese model, pursued a radical renewal in his later life and the filling of Chinese chairs with German professors.

His stays in the West increased his dissatisfaction with the government of the Qing Dynasty and so he began his political activities by organizing reform groups of Chinese exiles in Hong Kong. In October 1894 he founded the Xingzhonghui (興 中 會 / 兴 中 会 - "Association for the Restoration of China") with the aim of creating a platform for future revolutionary activities.

In 1895, the " Canton Uprising " (乙未 廣州 起義 / 乙未 广州 起义) that he had helped to plan failed. The Qing government put a bounty on him and Sun went into exile in Europe , the United States , Canada and Japan for 16 years . There he raised money for his revolutionary activities. In Japan he joined Chinese dissident groups, where in 1905 he founded the Tongmenghui League (about "Chinese Revolutionary League"), the predecessor of the Kuomintang . He was expelled from Japan to the USA for this. During this time he also began to wear Western suits and had his Chinese braid cut off.

On October 10, 1911, the Wuchang uprising began , which marked the beginning of the Xinhai Revolution and led to the end of the two thousand year rule of the imperial dynasties in China. Sun heard of the successful military rebellion against the Qing Dynasty. He then went to Europe to convince the Western powers not to grant the Qing any more loans. In London he had such an important success. He returned to China from France for Christmas.

Presidency in the new republic

On December 29, 1911, Sun was elected interim president of the Republic of China at a conference of provincial representatives in Nanjing .

Although the Kuomintang historiography places great emphasis on the role of Sun, many historians doubt that he played a major role in the 1911 coup, simply because he was overseas at the time. Rather, he was elected interim president because he was respected but insignificant and represented a compromise candidate between revolutionaries and the conservative nobility. On August 12, 1912, with a view to the upcoming parliamentary elections, he founded the National People's Party ( Kuomintang ) from numerous smaller political groups .

After he was sworn in, Sun convened delegates from all provinces to establish the National Assembly of the Republic of China. This assembly declared the transitional right to be the basic law of the new republic.

The transitional government was nevertheless in a very weak position: the southern provinces had declared their independence, while the north had not yet done so. The interim government also had no armed forces because its control over the new army was poor and there were many troops loyal to the Qing. Therefore, Sun needed the support of Yuan Shikai , who was subordinate to the northern Chinese military with the Beiyang Army . Sun was forced to promise him the presidency so that he would side with the revolution and force Emperor Puyi to abdicate.

When Yuan was becoming a dictator , Sun attempted a revolt against him in 1913. When it failed, Sun went into exile in Japan, where he reorganized the Kuomintang.

There he married Song Qingling on October 25th after separating from his first wife, Lu Muzhen .

In 1917 he returned to China and in 1921 was elected President of the self-proclaimed national government in Canton . In 1923 he declared his three popular principles in a speech to be the basis of the state and his five-yuan constitution as a guideline for the political system.

In order to have military clout for a northern expedition against the militarists in Beijing , he founded the Whampoa Military Academy near Canton, with Chiang Kai-shek as commander and party comrades such as Wang Jingwei and Hu Hanmin as political teachers.

In the early 1920s, Sun got help from the Comintern to reorganize the Kuomintang into a Leninist party. At the same time he negotiated the first united front of communists and Kuomintang. In 1924 this alliance was strengthened to bring the country better under control. At the time, Sun was convinced that China could only be united by force from its base in southern China. After a period of political tutelage, there should then be a transition to democracy.

On November 10, 1924, Sun traveled north and advocated an all-China conference and the abolition of unfair trade agreements with the West. Two days later, despite poor health and the civil war, he traveled north again to discuss the country's future.

His political philosophy, known as the triple popular principle (三民主義 / 三民主义), was published in August 1905 and was based heavily on American progressivism .

In his work Methods and Strategies for Building the Country , completed in 1919, he suggested using this principle to achieve ultimate peace, freedom and equality in China.

After Sun's death, a power struggle broke out between his young protégé Chiang Kai-shek and the elder Wang Jingwei , who split the Kuomintang. That was partly due to the mixed legacy that Sun Yat-sen had left. When the alliance between communists and the Kuomintang dissolved in 1927 and civil war broke out, everyone claimed to be its real heirs. This split persisted during the Japanese War .

Sun's widow Song Qingling sided with the communists during the civil war and was Vice President of the People's Republic of China from 1949 to 1981, and became honorary president shortly before her death in 1981. Her sister Song Meiling, in turn, was the wife of Chiang Kai-shek.

In the People's Republic of China he is seen as a Chinese nationalist and a champion of the republic and socialism. In recent years, Sun has also been brought to the fore by the Chinese government, not least to improve relations with Taiwan and its reunification supporters there. There is now a large picture of Sun Yat-sen in Tian'anmen Square for the May celebrations , while pictures of Marx and Lenin can no longer be seen.

The Zhongshan Station in Antarctica , opened in 1989, is named after Sun.

Presidents (Heads of State) of the Republic of China