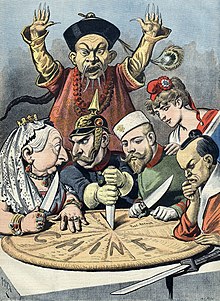 The so-called unequal treaties ( Chinese 不平等條約 / 不平等条约, Pinyin bùpíngděng tiáoyuē ) were between the mid-19th century and the First World War between the "Western" foreign powers ( Britain , France , USA , Russia , Japan ) on the one hand and China , Japan ( Tokugawa Shogunate ), Korea , Persia and Siam on the other hand closed. They saw multiple restrictions on sovereigntyin the fields of politics , administration and jurisdiction .

Concessions were coerced from the Middle Kingdom, especially in the area of ​​trade policy (see China trade ), such as the opening of ports ( contract or treaty ports ) or reparation payments . In addition, Japan and China were forced to open up to Christian missions . Appropriate consideration by the contractual partners was not intended. The most important dissimilar contracts include:

The 16 heads of state discuss the shape of the earth. From the illustrated monthly The Catholic Missions of the Jesuits, May 1903.

At the official level, the term unequal contracts was first used in 1926 by the Beijing government in connection with the repeal of the Sino-Belgian treaty of 1865. It was not until seventeen years later that the Chinese government was able to announce the end of the era of "unequal treaties" based on the treaties signed with the USA and Great Britain in 1943 (relating to the annulment of extraterritorial rights, among other things).

Treaties of European states with Japan:

Treaties of Japan with other Asian countries:

Wikisource: Additional convention to the German-Chinese friendship, shipping and trade treaty of September 2, 1861, together with explanatory special provisions. March 31, 1880  - Sources and full texts

Wikisource: Convention For The Lease Of The Liaotung Peninsula (Luda-Lachtvertrag)  - Sources and full texts (English)