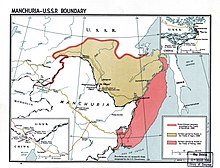 Territories ceded to Russia in the Treaties of 1858 and 1860

The Beijing Convention (北京 條約 / 北京 条约, Běijīng Tiáoyuē ) of October 18, 1860 consists of three treaties and is a supplement to the Treaty of Tianjin , with which Great Britain , France and Russia placed additional burdens on the Chinese Empire, which was finally defeated in the Second Opium War . The Beijing Convention is one of the unequal treaties that the colonial powers imposed on China.

China undertook to ratify the Treaty of Tianjin of 1858 , and also to open the port of Tianjin as a further contractual port for overseas trade , allow foreign fleets to move freely on the Chinese river network, and allow its own citizens to emigrate on British and French ships allow. In addition, a “ reparation payment ” of a further 16 million tael and a general exemption from customs duties for textile imports were planned. The previously only leased Kowloon was given to the British Crown ColonyHong Kong ceded. Russia, which was not involved in the war, received all of Outer Manchuria , including what is now the Primorye region , where the port of Vladivostok (German: Rule the East ) was founded in 1869 .

The unequal treaties were partially revised in the course of the 20th century , most recently Hong Kong and Kowloon were returned to China in 1997. Only the Sino-Russian border in the Far East has remained unchanged since 1860.