from Wikipedia, the free encyclopedia
This is the spotted version , flagged on July 4th, 2020 . There are 2 pending changes that have yet to be viewed.

The title of this article is ambiguous. For the Estonian diplomat of the same name, see Kaja Tael .

Tael is the name for a Chinese currency unit that is no longer in use today . Originally the tael or liang was a unit of measurement for silver that fluctuated greatly depending on the time and place. The tael is still used today in various Southeast Asian countries as a unit of weight with values ​​between 37.4 and 37.8 g.

The word tael is derived from Portuguese from the Malay word tahil , which means something like "weight". In Thai it is called ตำ ลึ [ tamlɯŋ ]. An older, popular name for the tael as a silver bar was also Paes for "bread".

The conceptual confusion about the Chinese currency terms was so great in foreign books that the author Justus Scheibert felt compelled to provide a precise definition at the beginning of the 20th century:

"The tael is nothing more than a 'concept', and a fluctuating one at that; in every province, indeed in almost every city, its value is calculated differently and, moreover, the latter in international traffic also depends on the current price of silver.

The Chinese merchants, on the other hand, still have the old method of payment, in which Abraham had already argued with Hephron when buying Sarah's grave site (Gen. 23, 16): they weigh their money. There are no embossed or cast pieces of silver in the interior of the country, but the merchants carry silver bars, each weighing a little more than a kilogram, and then use large scissors to cut off as much as the bill. These cuttings are collected in sacks, and when a sufficient quantity is available, they are brought to the changer and melted down again into bars.

Every merchant therefore has a weighing bowl, which is kept in a glass case, on which the words used to be written: 'Dare (sic) is busy, weighs goods worth many thousands of taels every day.'

The Chinese merchants have developed a wonderful skill when cutting the silver bars, so that hardly a piece needs to be cut off or added when reweighing. The evil world claims, however, that the Chinese silver changer has an even greater skill in handling the scales (sic!) Than in using the scissors and that it always makes a small difference whether he buys or sells.

In any case, the money changers are always some of the richest people in town; but it is far more correct to give them this not quite proper extra advantage than to fall into the hands of torn crooks who mix the silver with inferior metal or, since a keen eye can easily see the fraud, put it in the middle of the bar Hide piece of iron. "(Quoted from Justus Scheibert: The War in China 1900–1901; Berlin 1909) 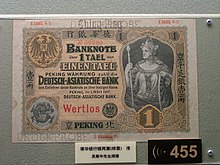 A Tael of the German-Asian Bank

Theoretically, the Tael should correspond to 1000 cash . In fact, the physical Tael silver bar was deliberately occasionally added with inferior antimony . In the last quarter of the 19th century, 10 Mexican pesos were worth 7.2 tael. In total there were around 170 different taels, each with a different weight. Examples:

The government tael was also called Haikwan tael ( Chinese  海關  /  海关 , Pinyin hǎiguān ), since all customs duties (Chinese: haiguan) had to be paid with this monetary unit. Other more important units of account included the Kuping tael (101.64 per 100 haikwan) or the Tientsin tael (105.2 per 100 haikwan). After 1868 the value in China was calculated as follows:

After the open door policy was enforced , all imported goods in China were charged according to the HKT, a currency that was de facto out of circulation. The value of the Haikwan Teal was set at 1.50 Chinese silver dollars. The HKT was nominally abolished on February 1, 1930. He was replaced by the new Customs Gold Unit (CGU), whose value at 0.40 US dollars , or 0.20 pounds Sterling was. On March 10, 1933, the HKT was finally abolished and replaced by the yuan .