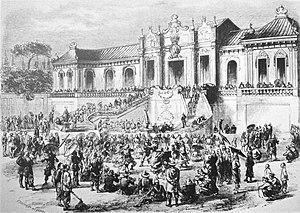 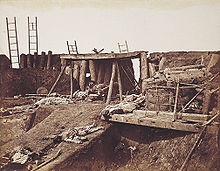 Dagu Fortress after it was captured by British and French troops, photo by Felice Beato

The Second Opium War or Arrow War of Great Britain and France against the Empire of China lasted from 1856 to 1860 . The European powers tried to force the empire, which had been weakened by the Taiping rebellion , to make new contractual concessions in foreign trade by demonstrating military power. The fighting ended after attempts by the Chinese government to prevent ratification, in 1860 after the allied troops marched into Beijing with the ratification of the Treaty of Tianjin , which further opened China to European economic interests. When the Europeans marched into the Chinese capital, they destroyed the Imperial Summer Palace .

After the First Opium War , Britain had access to several trading ports. However, exports to China stagnated after the war and were lower in 1849 than in 1843 in the first post-war year. The British government blamed the Qing government for the lack of exports and tried to revise the Nanjing Treaty , which was enforced by military force, again through the use of military force. The aim was to legalize the opium trade and open up the Chinese hinterland beyond the treaty ports for British export interests.

On October 8, 1856, Chinese officials boarded the Lorcha Arrow , a Chinese ship registered in Hong Kong and sailing under the British flag . There were suspicions of piracy , smuggling and illegal opium trade against this ship . Chinese merchants often let such ships with Chinese crew sail under a British “puppet captain” in order to cheat their own tax authorities. Since the First Opium War , Chinese officials have had no right to inspect British ships. Twelve of the 14 Chinese crew members were arrested, captured and not released even at the request of Great Britain. The British then declared war on China.

The British government sent Lord Elgin to China in 1857 as Plenipotentiary . His mission was to force the Chinese government to make trade policy concessions by means of a military demonstration of force in northern China near the capital Beijing. While Elgin was in transit with the expeditionary force in British India , the Sepoy uprising broke out there . The troops actually assigned to Elgin were assigned to work against the insurgents with his consent. Elgin's journey was delayed as a result and he continued it initially without the military towards Hong Kong , where he awaited further reinforcements.

France joined the British military operation against China on the pretext of revenge for the execution of the French missionary Auguste Chapdelaine in Guangxi , but the real reason lay in an attempt to expand its sphere of influence in China.

The British-French troops took in the Battle of Canton in 1857 in Canton one. After the city was conquered, Goveurner Ye Mingchen, who was responsible for the confiscation of the Arrow , was captured and exiled to India. On May 20, 1858, the expeditionary force attacked the Dagu fortresses at the mouth of the Hai He . The forts were quickly captured by the landing of 1,800 marines and the bombardment of the fleet. Around 500 of the 3,000 strong fortress garrisons were killed in the battle with very little losses of British and French soldiers. After sacking the forts, the expedition fleet turned the Hai He upriver. The fleet was able to avail itself of the help and labor of the local civilian population by providing food or cash benefits.

In June 1858 the first part of the war ended with the signing of the Treaty of Tianjin , which was also negotiated by France, Russia and the USA . This agreement opened 11 more ports to trade with the west. China initially refused to ratify the agreements, which, due to their coercive nature , are counted among the " unequal treaties " by Chinese historiography .

The British government sent Frederick Bruce as ambassador to Beijing to ratify the right to diplomatic missions . The Chinese authorities refused to allow him to go upstream to the capital. A blockade of Hai He prevented his ship from continuing. There was a skirmish when the British ships attacked the coastal defenses. From the perspective of the Europeans, the fleet, including the landing command, suffered unexpectedly high losses with 519 dead and 456 wounded and had to withdraw under the fire protection of the Americans under Josiah Tattnall .

The Chinese side had arrested and tortured a British negotiating mission with 31 men under Harry Smith Parkes in addition to the river blockade . The British government ordered Lord Elgin, who had meanwhile been appointed Postmaster General, to return to China as Plenipotentiary. There, under his leadership, a naval unit was supposed to carry out another punitive expedition against the Qing state.

In 1860, the French and British Indian troops under James Hope Grant gathered in Hong Kong. The force consisted of 11,000 British / Indians and 6,700 French and landed near Pei Tang on August 1st. On August 21st, they successfully captured the fortresses of Dagu . These troops reached Beijing on September 26th and took the city by October 6th.

On October 8, a French unit reached the New Summer Palace and the Old Summer Palace . The emperor had meanwhile fled the city and had entrusted Prince Gong with negotiating a peace with the Europeans for the empire weakened by the Taiping revolt and the Nian rebellion . The European troops plundered the emperor's palaces in excess of several days. On October 18, the Anglo-French forces destroyed the palaces as planned and on the orders of their leadership. A few days later, Lord Elgin and Prince Gong ratified the Beijing Convention , which put an end to the war under very favorable conditions for the Western powers.

The Treaty of Tianjin of 1858 was expanded to include the Beijing Convention and ratified in this form by Emperor Xianfeng on October 18, 1860. This gave Great Britain, France, Russia and the USA the right to open embassies in Beijing (until then a closed city) . The opium trade was legalized and Christians were given the right to property to own and to the Chinese people proselytize . The treaty thus fulfilled the demands of both Christian missionaries in European countries and the political elites that were keen to expand.

The war received benevolent comments from the British press, especially The Times , which was critical of the government during the First Opium War . The British press blamed the Qing Dynasty for the war on their own country. The Second Opium War was one of the first wars to use photography as a means of propaganda and documentation. The allied expeditionary corps was accompanied by the Italian photographer Felice Beato from the spring of 1860. This documented both their own strength and damage and casualties on the other side. The signing of the Beijing Convention by Prince Gong was also photographed by the winners.

Wikisource: China and the Attack on Canton  - Sources and full texts (English)