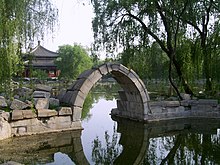 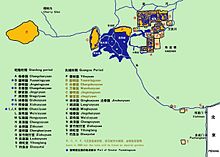 Topographical integration of the gardens into the system of watercourses

With Yu Yuan ( Chinese  御園  /  御园 , Pinyin Yù Yuán  - "Imperial Gardens") is one from 1709 developed area of three gardens in Beijing called. It is under the name "Yuanmingyuan" ( English Old Summer Palace ) known. In western scientific literature, the name of the western (original) garden, Yuanming Yuan, is also used for the entire garden complex.

The gardens, which are largely destroyed today, are located 8 kilometers northwest of the former imperial capital Beijing. The complex with its numerous buildings was the most important imperial residence of the emperors of the Qing Dynasty from around 1725, and where they conducted state affairs for decades. Today the area is in the immediate vicinity of Peking University and Tsinghua University and is a tourist attraction.

The so-called Old Summer Palace consists of three adjoining extensive garden and palace complexes. They are: 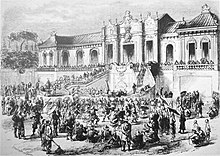 The palace was built during the tenure of several emperors of the Qing Dynasty and has been continuously expanded throughout its existence. The origin lay in a garden area in the center of the Yuanming Yuan as a western garden complex. It was started in 1707/09 under the later Emperor Yongzheng during the reign of his father Kangxi , and after taking over the government in 1725 it was significantly expanded and expanded. Yongzheng created lakes, streams and ponds fed by a river system to complement the rolling hills and soils, and named 28 scenic locations within the garden. He also built a series of living tableaus that he and his family could interact with. Such a scene was called z. B. Grain as abundant as fields , where court eunuchs pretended to be rural farmers on an island, and another was called the Court of Universal Happiness , a sham village where the imperial family could interact with shopkeepers, represented by eunuchs.

Under Yongzheng's son, the Qianlong Emperor, the complex was expanded and expanded on a large scale from around 1736 over many years, mainly to the east and from around 1770 to the south. The number of scenic viewpoints rose to 50 and the emperor personally oversaw the construction process. The elements of the complex were depicted in the Forty Views of the Yuanming Yuan , an album created by the court painters of the Qianlong Emperor in 1744.

Among other things, from 1747 onwards, Qianlong had a baroque-style garden with fountains, water features and a maze built in the northern area of ​​Changchun Yuan with the Xiyang Lou , based on the model of Versailles . 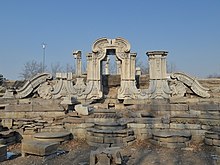 Most recently, the garden complex comprised around 140 buildings on an area of ​​350 hectares. The Old Summer Palace was famous not only for its magnificent Changchun Yuan and Qichun Yuan Gardens, but also for its important libraries and rich art collections.

In the course of the Second Opium War , Emperor Xianfeng had 30 British and French ambassadors interned and tortured here, who were supposed to prepare for the establishment of diplomatic relations after the conclusion of the Treaty of Tianjin . Twenty prisoners - seven French and thirteen English - were killed. Thereupon, in October 1860, an English division of an Anglo-French invading army under the leadership of Lord Elgin laid several Beijing palace and gardens, including the Yuanming Yuan itself, in rubble and ashes. The commander of the French forces of the expeditionary force, General Montauban, refused to take part in this retaliation.

In the course of the subsequent looting, in addition to all kinds of art treasures, the precious clocks that King George III. had sent the Qianlong Emperor as a gift through the Macartney Mission , but which had been interpreted by him as a “ tribute ” to a submissive people. The booty also included a little Pekingese dog that was given to Queen Victoria as a present and was christened "Looty" (English loot means "spoils of war") in reference to the looting .

Timid attempts by the Qing government to rebuild the Yuanming Yuan failed due to lack of funds. In 1900 the remains of the facility were finally razed by the intervention army sent to suppress the Boxer Rebellion ; the ruins were subsequently used as a quarry and in some cases also provided building material for Peking University . The first research into the complex began around 1930 and sources were published. Today the parks that remain on the site are valued by the population of the capital as a destination for excursions and further research is carried out.

The site of the Old Summer Palace has been on the list of monuments of the People's Republic of China since 1988 .