from Wikipedia, the free encyclopedia
This is the spotted version , flagged on January 28, 2020 . There is 1 pending change that has yet to be viewed.

This article is about the Chinese emperor. For the dictionary named after Kangxi, see the Kangxi dictionary . 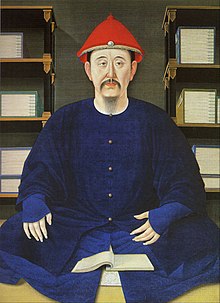 The sixty-one-year term of office of Emperor Kangxi has gone down in Chinese historiography as an important epoch, with the ruler's enormous achievements being praised again and again to this day. He understood the need to reconcile Manchu rule and Chinese society, working relentlessly to attract China's intellectual elite. The emperor was initially confronted with internal crises that threatened his government, but which he was able to overcome successfully in order to then turn to external threats. As a result, Kangxi was able to push China's borders far to the north and thus restore its supremacy in Asia. Nevertheless, at the end of his life there were factional battles at court and disputes about the succession to the throne.

The skillful court policy of the dowager empress Xiao Zhuang enabled Kangxi to create a basis for the later seizure of power. The first coup was to marry the eleven-year-old Emperor on October 16, 1665 to a granddaughter of the regent Soni. She was the daughter of Gabula, who, like his father, belonged to the influential Heseri clan. She was also the niece of Songgotu, who in turn would be the most important and influential supporter of Emperor Kangxi for a long time. It was also important that a younger sister of Songgotu was the concubine of Yolo, the president of the Imperial Sound Court and an influential member of Yizheng Da Chen.

When Soni - the only regent who was really well-disposed towards the emperor - died on August 12, 1667, the young ruler declared himself too young to take over the affairs of state. But since Oboi, Ebilun and Suksaha agreed to help him with state affairs, with the support of Xiao Zhuang and the Ministry of Rites, August 25 was chosen as a suitable day for the official beginning of Kangxi's rule. The reason why the regents agreed to this plan was either the will to honor Emperor Shunzhi, who also took power at the age of 13 and at the same time to keep the reins in hand as official assistant, or the regents only did it pro forma and were outwitted by the imperial widow by naming the date extremely early. In any case, the emperor began to direct the fate of the young Qing Empire from this date. However, he did so only nominally - the real power was still in the hands of the oboe. He appointed loyal officials to influential positions, controlled the Imperial Bodyguard and demonstrated his abundance of power by arresting Suksaha in a dispute over the distribution of the banner land and sentencing him to death.

Nevertheless, Kangxi was also able to achieve initial successes in court politics. So the emperor got promotions of some of his supporters and the enforcement of a Jesuit to the office for astronomy in 1668. This office was transferred to two Belgian Jesuits during the lifetime of the emperor, first Ferdinand Verbiest and after his death in 1688 Antoine Thomas . Finally, based on Songgotu and the Imperial Household Department, Kangxi indicted Oboi and Ebilun on June 14, 1669. They were found guilty of a total of 30 different offenses and detained by a quickly convened commission. The powerful regent died in prison that same year.

Under his government, the powers of the three great princes / marshals Wu Sangui , Shang Kexi and Geng Zhongming, who controlled almost all of southern China, were initially restricted . The answer was an uprising of the three under Wu Sangui († 1678) in 1673–1681, which almost cost the Qing dynasty the throne.

At the same time piracy flared up again. A former Ming general named Zheng Chenggong ( Koxinga , 1624–1662) fought in southern China as an army leader and pirate against the Qing dynasty. Shortly before his death, Zheng drove the Dutch colonial rulers out of Taiwan and founded the short-lived Kingdom of Dongning there . Only from 1683 was Taiwan permanently under Chinese administration.

Under Kangxi we also note the increased occurrence of Europeans. Cossacks had founded settlements on the Amur and collected fur animal tributes from the local tribal groups . The city of Albazin was destroyed by the Chinese and Russia had to accept the Amur border in the Treaty of Nerchinsk in 1689 (with the mediation of the Jesuits ).

In the years 1690–1696 war broke out with the Oirats , who wanted to control Mongolia . When the Khan of the Kalkha Mongols was defeated in 1690, the princes asked the Kangxi emperor for help. (You were faced with the choice of Russia or China - and the decision was made in favor of China, because Lamaism was in common with the Manchus , and could therefore expect more understanding from this side.) The emperor supported the Mongols and led the army twice personally against the Oirate Prince Galdan.

Although the war was decided by the quick raid on the Tuul near Zuunmod , it is noteworthy that the Kangxi emperor, thanks to the Jesuits, obeyed the rules of European warfare. His army used cannons and muskets in 1690 and 1696, which the Oirats were no match for. The emperor took lessons from the Jesuits, especially from Ferdinand Verbiest , not only in warfare, but also in astronomy , mathematics and anatomy . Shortly after his death, his successor, Yongzheng , expelled the European missionaries to Macau because he viewed them as troublemakers and members of secret political societies . Christian proselytizing was banned.

Kangxi is known not only as a scholar, but also as a patron of the arts and sciences. He employed the Swiss Jesuit and watchmaker Franz Ludwig Stadlin (1658–1740) at his court and visited him while he was teaching apprentices. He had magnificent residences built in Beijing and Jehol , extensive scientific works worked out (including the Kangxi dictionary ) and imperial workshops (including glass and enamel work) founded. Kangxi had relations with some European courts and the Roman Pope and received their envoys several times. In 1684, 1689, 1699, 1703, 1705 and 1707 he also undertook expensive and extensive inspection trips to the south in order to bind the local upper class and scholars to himself. Despite the high cost, this emperor is considered a thrifty ruler, unlike the Ming emperors Wanli or Tianqi .