A Manchu in traditional clothing

The Manchu ( Manchu Manju ; Chinese 滿洲族  /  满洲族 , Pinyin Mǎnzhōuzú , mostly short 滿族  /  满族 , Mǎnzú ), also Manchus ( 滿族人  /  满族人 , Mǎnzúrén ) are a Tungusic people in Manchuria in northeast China . As of 2010, after the Zhuang and Hui Chinese, they are the third largest of the 55 recognized ethnic minorities in China . Most of the 10 million members of the group now speak Chinese in the dialect of their place of residence, especially the Northeast dialect . Only a few dozen people still speak the Manchurian language as their mother tongue. Several thousand people are fluent in Manchu as a second language. However, the related Xibenish spoken in Xibe's Qapqal Autonomous County in Xinjiang is actually a dialect of Manchurian.

The Manchu language and culture have been revitalized since 1980 and are supported by the local government. Social events, ceremonies and language lessons to promote Manchu culture are very popular with ethnic Manchu as well as the Han .

The Manchu descend from the Tungus people of the Jurchen , who had their home in northern Manchuria and who conquered the whole of northeastern China in the 12th century. The name " Manschu " was officially introduced in 1635 by Huang Taiji ( 皇太極  /  皇太极 ), who belonged to the Jianzhou Jurchen . However, it should have been used as early as 1605. Nurhaci's son Huang Taiji decided to use the name “Manchu” and forbade the use of the name “Jurchen”. The original meaning of the term has not been established, but it is believed that it was an ancient word for the Jianzhou Jurchen. According to another theory, the term comes from the Bodhisattva Manjusri (the "Bodhisattva of wisdom"), whose incarnation claimed to be Nurhaci. Before the 17th century, the Manchu ancestors were a rural people who subsisted on hunting, fishing, and some farming. 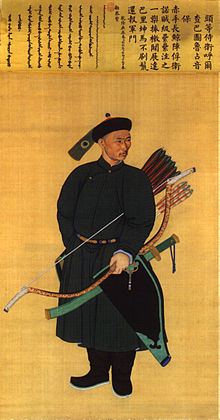 A Manchu in a traditional warrior pose

In 1616, the Manchu leader Nurhaci established the Late Jin Dynasty and the Amaga Aisin Gurun State , or Manju Gurun for short (“State of the Manchu”) and united the Manchu tribes. The Eight Banners military system also dates back to this time . After Nurhaci's death in 1626, his son Huang Taiji changed the name of the dynasty to Qing .

When Li Zicheng conquered Beijing in 1644 , the Qing Army attacked the Chinese area beyond the Great Wall and made Beijing after Mukden ( a Chinese city since the Warring States' times ) the new capital. Within a few years they conquered the entire territory of the Ming Dynasty.

In the Qing dynasty, all important offices of the empire were occupied by one Han and one Manchurian member, so that a large proportion of the Manchu, whose number was comparatively small overall, were government officials.

During the Qing Dynasty , the government tried to preserve the Manchurian culture and language. These attempts were not very successful in the long term, because the Manchu adapted more and more to the customs of the Han and gradually adopted their language. As early as the 18th century, Manchurian was rarely spoken even at the imperial court. In the 1880s, the linguist Paul Georg von Möllendorff reported that the language was only used orally at court as fixed commands during ceremonies. The Manchu alphabet but was continued until the collapse of the dynasty next to the Chinese as a written language for official documents and communication between the emperor and the banner officers used.

On the other hand, the Manchurian also influenced the Han culture to a great extent. Large groups of Han, known as the Han Banner People , have been Manchurized in a reverse process since the 17th century. Many things that are now considered typical of North China culture are in fact Manchurian in origin and the result of reverse assimilation.

Although the Manchus assimilated to the Han culture and always saw themselves as Chinese in the sense of belonging to the Middle Kingdom, they were portrayed as a foreign colonial power by Chinese nationalists towards the end of the Qing Dynasty. This representation quickly disappeared because after the revolution of 1911 , the new republican China constructed the Manchu into a new, republican national identity.

In 1931, the Japanese erected a as in northeast China Mandschukuo ( 滿州國  /  满洲国 , Mǎnzhōuguó , Jap. まんしゅうこく , 満州国 Manshūkoku ) designated puppet state . At that time the area was already mostly Han and even among the Manchu this project did not arouse much interest.

Presumably a “Manchurian” state was only established to justify secession and thus not only to weaken China, but also the strong influence of Russia in the region since 1890 and to prepare for an invasion of China.

After the Second World War , the territory became part of China again.

While most of the (northern) Tungus peoples led a nomadic life , the southern Tungus mainly pursued agriculture . The ancient Manchu lived mainly in villages and towns and practiced both agriculture and hunting . 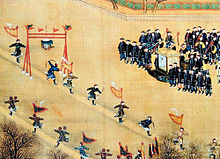 Originally, the Manchu and their ancestors followed an animistic religion of classic Siberian shamanism with a variety of gods and spirits, which are known as Enduri . Many of these gods were once human ancestors who distinguished themselves through special achievements or abilities or who were worshiped because of a pronounced ancestor cult . After the conquest of China in the 17th century, the Manchus came into contact with Chinese culture. They were heavily influenced by Chinese folk religion and kept few shamanic rites. Shamans used to be considered highly respectable and wise people, but in the course of history they have lost this high position.

Ethno-religious symbol of the Manchu and their folk religion. In stylized script: ᠮᠠᠨᠵᡠ; Manju .

The Jurchen - the ancestors of the Manchus - were born in the 10th – 13th centuries. Influenced by Buddhism of the Balhae , Goryeo , Liao and Song empires in the 19th century . The rulers of the Qing Dynasty were always called "Buddha". However, Buddhism was used by the rulers to exercise power over the Mongols and Tibetans. Buddhism was of little importance to the common Manchus in the Qing Dynasty.

Manju Autonomy in the People's Republic of China *

* All administrative units are autonomous districts.