Tatar costume in the Museum of Ethnic Cultures at Minzu University

The Tatars of China (塔塔尔族Tǎtǎěrzú ) are one of the 56 officially recognized nationalities of the People's Republic of China . In the 2010 census, only 3,562 Tatars were counted in China.

Their ancestors were Volga-Tatar traders and merchants who settled in Xinjiang since the 1820s .

Almost 800 Tartars from China still speak an archaic variant of Tatar , which is free from the foreign words of the modern written language. In private correspondence, the Arabic script (Iske-Imla alphabet) is sometimes also used for Tatar. The majority of the Tatars in China - depending on the settlement area - speak Uyghur or Kazakh as their mother tongue and often as their only language. The school education is accordingly in Uyghur or Kazakh and thus the Arabic script for these two languages, which is common in China, is learned.

Spread of the Tatars in China

Distribution at the provincial level according to the data of the 2010 census (reference date November 1, 2010)

Representations of Tartars by Joan Nieuhof (1665) 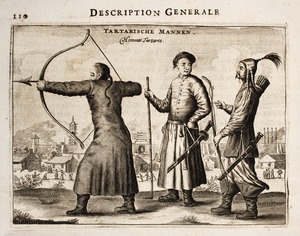