The 70th  Berlin International Film Festival (Berlinale) took place from February 20 to March 1, 2020. For the first time, they were under the direction of Carlo Chatrian and Mariette Rissenbeek , who officially replaced the previous festival director Dieter Kosslick on June 1, 2019 . While Chatrian was responsible for the artistic direction, Rissenbeek took over the management. Compared to the previous editions, the date of the film festival was postponed to the end of February, which means that the Berlinale took place for the first time since the scheduling in February shortly after the Oscar ceremony . With the world premiere of the Berlinale SpecialThe Berlinale opened with the invited feature film My Salinger Year by Philippe Falardeau . 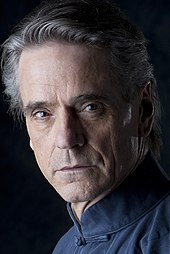 The jury president of the competition, which among other things will award the Golden Bear for the best film at the festival, was the British actor Jeremy Irons this year . The main prize, the international co-production was Sheytan vojud nadarad (international festival title: There Is No Evil / There is no evil ) by Mohammad Rasoulof excellent. The Iranian director was not able to participate in the festival because he was not allowed to leave his home country.

The actor Samuel Finzi was hired to host the opening gala and the award ceremony .

From mid-December 2019, the first films were announced in the various sections of the festival. The full program was published on February 11, 2020. For the 70th edition of the festival, Encounters was a new competition section. The special series NATIVe (presentation of indigenous films) and culinary cinema have been abolished. The management of the Panorama , Berlinale Shorts , Forum and Berlinale Series sections as well as the selection committees for the international competition for the Golden Bear and the forum also changed .

The British actress Helen Mirren was honored with the Honorary Golden Bear for her life's work and an homage from five films at the festival . This year's Berlinale Camera went to the German filmmaker Ulrike Ottinger , who presented her new documentary Paris Calligrammes as a contribution in the Berlinale Special section .

At the end of January 2020, the organizers decided to suspend the award of the Alfred Bauer Prize initiated in 1987 . Research published at the time made it known that Bauer probably held an important position during the Nazi era .

The Berlinale 2020 has a preliminary annual budget of 26 million euros. A share of 8.4 million euros comes from the institutional funding of the Federal Commissioner for Culture and the Media .

Competition for the Golden Bear

Jeremy Irons was presented as jury president in January 2020 . The British film and theater actor first appeared at the Berlinale in 2011 with his competition entry The Great Crash - Margin Call . In 2013 , Irons played the lead role in the out-of-competition film Night Train to Lisbon . So far, he has appeared in more than 90 film and television roles, often taking on the role of the villain and has been hailed by critics as an “icon of international auteur cinema ” and “master of ambivalence”.

Irons had come under fire for earlier controversial remarks on same-sex marriage , abortion, and for signing a petition in 2009 for filmmaker Roman Polański , who was confronted with rape allegations . He had apologized several times for his statements and on the opening day at a press conference he had unequivocally acknowledged women's rights and diversity .

Several jury members, who were named on February 4, 2020, will assist the jury president in awarding the prizes:

The selection of films in the competition was announced on January 29, 2020 during an official press conference by Carlo Chatrian and Mariette Rissenbeek. A total of 18 films are competing for the Golden Bear.

Films that previously ran out of competition will in future be presented as a Berlinale Special Gala . The original version of Der verrückte Professor (1963) will be shown on the occasion of the transfer of exclusive documents from the estate of Jerry Lewis (1926-2017) to the Deutsche Kinemathek in the presence of his son Chris Lewis. Films announced so far (incl. Berlinale Special ):

Julia Fidel , who had previously been jointly responsible for the Panorama section and the generation selection committee , was appointed as the new head of the section . The section is to be opened with three 55-minute episodes of the Freud series , the first joint project between ORF and the streaming provider Netflix .

The Drama Series Days , aimed at accredited specialist audiences , will be renamed Berlinale Series Market in 2020 .

The new competition section Encounters (German: “Encounters”) is intended to present “aesthetically and formally unusual works by independent filmmakers”. A maximum of 15 feature or documentary films should be shown as world or international premieres with a running time of 60 minutes or more. A three-person jury decides on awards for the best film, the best director and a special jury award. The artistic director Carlo Chatrian justified this step by stating that technological and economic developments had "made the boundaries between feature and documentary film, film essay and genre less rigid and more permeable".

The program was announced on January 17, 2020. Malmkrog by Cristi Puiu was chosen as the opening film.

In the Berlinale Shorts series , feature, documentary, experimental and animation films with a maximum length of 30 minutes (including credits) are shown. International contributions must not have been shown outside their country of origin before the Berlinale performance. After the long-time section head Maike Mia Höhne was appointed artistic director of the Hamburg International Short Film Festival , programmer, presenter and curator Anna Henckel-Donnersmarck took over the management from June 1, 2019.

In 2020, the International Short Film Jury will include the Hungarian animation filmmaker Réka Bucsis , the Turkish curator Fatma Çolakoğl and the filmmaker Lemohang Jeremiah Mosese from Lesotho. In addition to the Golden Bear for the best short film and the Silver Bear, the jury will award a nomination for the European Short Film Award and the Audi Short Film Award.

Michael Stütz, who previously worked as program manager and curator for Panorama , took over the management of the section . The former section head Paz Lázaro switched to the selection committee for the competition.

An initial selection of documentaries and feature films was announced on December 17, 2019. The first focal points included “filmmakers of an up-and-coming, idiosyncratic generation” with plural, postmigrant perspectives ( Faraz Shariat , Uisenma Borchu, Visar Morina ), “current transnational filmmaking” ( Pari ) and the persecution of the LGBTQI * community (Welcome to Chechnya) called. The program was supplemented on January 21, 2020, whereby the section leadership described the selection as “Filmmakers and protagonists stand against authorities”. The Swiss documentary film Saudi Runaway by Susanne Regina Meures was nominated .

The film critic, author and curator Cristina Nord took over the management of the section on August 1, 2019. It set up a new film selection committee made up of five experts.

The side series Forum Expanded will continue to be directed by Stefanie Schulte Strathaus.

The forum will take place for the 50th time in 2020 . On this occasion, the Berlinale is showing the full program of the founding year 1971, combined with a supporting program that puts the significance of the first year for the present and the development of the section up for discussion.

The program was announced on January 20, 2020. EL TANGO DEL VIUDO y su espejo deformante by Raúl Ruiz and Valeria Sarmiento was selected as the opening film. The current program includes 35 films, including 28 world premieres. It is paraphrased with many contributions that "look for ways to mediate between past and present [...]".

The film program for the 50th anniversary of the Forum section . The German anti-war film ok , which in 1970 led to the abandonment of the Berlinale and subsequently to the establishment of the forum , was nominated.

This Berlinale section shows suitable international film productions for children and young people. Long films with a running time of at least 60 minutes and short films with a maximum duration of 20 minutes that were completed within twelve months before the start of the festival were allowed. Foreign productions may be shown in advance at a non-European festival, broadcast in the country of origin on television or distributed via video-on-demand . European films (with the exception of German productions) are permitted in advance to have been published in the country of origin, at a national festival or an explicit children's or youth film festival, or to have had a national theatrical release. The head of the section is Maryanne Redpath. In 2020, the section comprises 59 competition entries, including 29 world premieres and eleven debut films from 34 countries. The proportion of women invited to directors is 58 percent.

As an award, a glass bear will be given to a film and a documentary by a children's jury (eleven Berlin children aged 11 to 14 years) and a youth jury (seven young people between 14 and 18 years of age). There is a separate international Generation Kplus jury that awards cash prizes for the best feature-length and short film donated by the German Children's Fund . Another international jury, on behalf of the Federal Agency for Civic Education , awards a grand prize for the best feature film and a special prize for the best short film.

The Perspective German Cinema section, created at the suggestion of Dieter Kosslick in 2002, presents both short and long feature, documentary and experimental films by young German filmmakers with a minimum length of 20 minutes. It is aimed at talented directors who are at the beginning of their careers. Prior participation of the entries at a film festival is not an exclusion criterion. Section head Linda Söffker , who made a selection from over 200 submitted contributions, outlined the program with “women who act in small and large contexts who move the fate of the world and who have their own idea of ​​home”. Kino International will serve as the premiere cinema for the section for the first time in 2020 .

The entries include the Kompass-Perspektive-Preis (endowed with 5,000 euros, jury: Mia Spengler , Bernd Lange and Melanie Andernach ), the "Kompagnon" award (grant of 5,000 euros / 2,500 euros for short films) and the Heiner Carow Award .

The contributions announced so far:

The American director, producer and screenwriter King Vidor (1894–1982) will be the focus of the retrospective. Rainer Rother , Artistic Director of the Deutsche Kinemathek - Museum für Film und Fernsehen and head of the retrospective, explained the choice: “With the help of King Vidor's work, not only the history of Hollywood over 50 years can be traced, but also that of the United States in that one Period: From the beginning, Vidor took up significant events and current political developments from the First World War to the Great Depression to the New Deal in his films . "Carlo Chatrian on King's importance for film history, but also the present:" King Vidor was convinced of the Humanity that cinema can convey to its audience, and for this purpose it has continually developed new cinematic means. That makes him today - perhaps more than other old masters, whose style is clearly identifiable - a source of inspiration for all those who want to tell our rapidly changing world. "

The award, endowed with 40,000 euros, is donated by the Rundfunk Berlin-Brandenburg (rbb) across all sections and awarded to a documentary film. The three-person jury consists of the German filmmaker and producer Gerd Kroske , the French-American filmmaker and curator Marie Losier and the Canadian filmmaker, singer, artist and activist Alanis Obomsawin .

The award, endowed with 50,000 euros, has been donated by the Society for the Perception of Film and Television Rights (GWFF) across all sections since 2006 and given to a debut film. The three-person jury consists of the Serbian director and author Ognjen Glavonić , the Egyptian director, producer and film collective founder Hala Lotfy and the Spanish programmer and film scholar Gonzalo de Pedro Amatria . 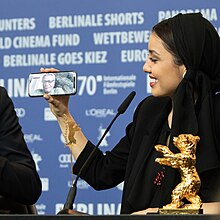 The following films were shown in the homage: