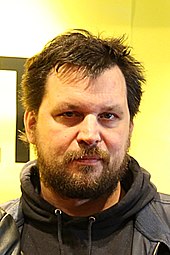 Sascha Alexander Gersak at the NRW premiere of "Volt," January 2017.

Sascha Alexander Geršak was born in Balingen, where he also grew up. From 2000 to 2003 he attended the European Film Actor School (EFAS) in Zurich , where he trained as an actor.

From 2004 Geršak began to appear as a theater actor, mainly on Zurich stages. He received the first praise from the professional critics for his repeated collaboration with the director and video artist David Hera, who made him a. a. as Pete in Harold Pinters Zwerge at the Zürcher Bunkr! -Bühne (2003) and in the title role of Howie the Rookie at the Exil-stage of the Schauspielhaus Zürich (2004). Other roles included a. that of Odysseus ( Odysseus XXXL , Schaffhausen 2003), Bertolt Brechts ( Avantgarde when calling , Freischwimmerfestival Zürich 2005), that of a choleric brothel keeper ( Hund eats dog , Munich 2006) or the pirate Blutsvende ( Pippi auf Takatuka , Theater Freiburg 2006). In 2008 Geršak was honored for his performance as Tayomaro in the play Rashomon: Truth lies next Door by the Swiss-German group “mikeska: plus: blendwerk” with the actor's award at the International Fajr Theater Festival in Tehran , Iran . Also at the Schauspielhaus Zürich he was part of the ensemble of Heike M. Goetzes in 2009/10. Why is Mr. R. running amok? after Rainer Werner Fassbinder , while he was most recently on stage for the Rote Fabrik Zurich in Fluch der Freiheit (2011, directed by Tobias Bühlmann) and Time is on your side (2013, directed by Corsin Gaudenz).

Parallel to his work at the theater, Geršak appeared in various short films and made his feature film debut in Simon Keller's tragic comedy Sonntag in 2007 . In the Swiss-German co-production he was seen as a nurse helping a suicidal patient (portrayed by Sandra Maria Schlegel ) to escape from the psychiatric clinic. This was followed by small and supporting roles on German television, including that of the violent pimp Kolja in Dominik Graf's award-winning crime series In the face of crime and that of a prison inmate and hostage-taker in the Munich crime scene episode Die Heilige with Miroslav Nemec and Udo Wachtveitl (both 2010).

Geršak became known to a larger German-speaking audience in autumn 2011 through his engagement for Stefan Schaller's feature film debut 5 Years of Life , which was awarded after a four-month casting process. In the drama he took on the leading role of the German-Turk Murat Kurnaz , who was arrested as a supposed terrorist in Pakistan at the end of 2001 and taken to the Guantanamo prison camp . During the shooting of the film, which shows the perfidious US interrogation methods and the consequences of solitary confinement, torture and arbitrariness, Geršak claims that he lost 20 kilograms and spoke of the most difficult role in his life until then. 5 Years of Life started in German cinemas in 2013 and earned him great praise from the specialist critics and a 2014 nomination for the German Film Prize for best leading actor . In the same year Geršak received the German Film Critics ' Prize for his portrayal of Murat Kurnaz as well as his performance in Katrin Gebbe's debut feature film Tore tanzt (2013) , which praised him as a victim or perpetrator for his physical play with full physical effort. In the last-mentioned drama he is seen as the sadistic head of the family who abuses his stepdaughter and the eponymous pious and uprooted boy (played by Gro Swantje Kohlhof and Julius Feldmeier ). In March 2018, he played one of the two hostage-takers at the time, Hans-Jürgen Rösner, in the ARD two-parter Gladbeck.

Sascha Alexander Geršak is the father of three children and lives with his family in Berlin . He has an older brother, Nikolai Geršak, who is the cantor of St. Nikolaus Church in Friedrichshafen , and a younger sister, Silvia Elvers; who is also a church musician in Kaufering.