Undine is a German-French feature film by Christian Petzold from 2020 . The love drama with Paula Beer and Franz Rogowski in the lead roles is based on the Undine myth . Director Petzold, who also wrote the screenplay, relocated the legend about the ominous water woman to contemporary Berlin . It is the first part of a planned film trilogy about characters from German Romanticism .

The world premiere took place on February 23, 2020 in the competition of the 70th Berlin International Film Festival , where Paula Beer won the Silver Bear for best actress and later also received the European Film Prize. The regular German theatrical release had to be postponed several times due to the COVID-19 pandemic and was set for July 2, 2020.

Berlin, in the present: Undine, who has a doctorate in history, works in the Senate Department for Urban Development and Housing in the Haus am Köllnischer Park and offers city tours for German and international guests. When her boyfriend Johannes announced in a café near her place of work that he wanted to separate from her, the impersonal young woman, who lived in the big city, was overtaken by a curse. Undine is an elemental spirit and destined to avenge the betrayal of her friend with his death and to return to the water from which she was once called. But Undine resists this determination and neither wants to kill her boyfriend nor leave Berlin.

Two years later, Christoph is in a relationship with his colleague Monika, who is expecting a child from him. He returns to the location of his previous accident at the reservoir for a work assignment. While welding underwater, he thinks he can feel Undine's hand on his and see her. However, he cannot verify their existence using underwater images. At night he secretly returns to the reservoir and looks for her. Monika secretly follows him and is shocked when she sees her lover disappearing underwater without diving equipment. In fact, Christoph finds Undine and they both hold hands for a moment. He leaves the lake and returns to Monika. In his hand he holds a small diver figure that he had once given to Undine. Undine observed from the surface of the water,

Undine is the first part of a planned trilogy by Petzold, which is to take on German romanticism and especially the motif of the elemental spirits. In the following films, Petzold wants to focus on aerial and earth spirits .

Franz Rogowski, Christian Petzold and Paula Beer at the presentation of their joint film Transit at the Berlinale 2018 .

The German theatrical release in the distribution of Piffl Medien was originally planned for March 26, 2020. After the global outbreak of the novel respiratory disease COVID-19 , the release of the film in Germany was postponed first to June 11th and then to July 2nd, 2020. The Match Factory has taken over the worldwide exploitation rights.

After its premiere at the Berlinale, the film received mostly positive reviews. In international criticism mirrors the British trade magazine Screen International received Undine 3.1 stars out of four possible. Behind the US contributions Never Rarely Sometimes Always (3.4 stars) and Rizi (3.3) from Taiwan took 3rd place among all 18 films in the Berlinale competition.

Wenke Husmann sees Petzold's adaptation as a “modern narrative”. In her review for Die Zeit , she writes that Petzold is not aiming for a romantic heat like Ludwig Tieck or Friedrich de la Motte Fouqué , but for a change of perspective, as Ingeborg Bachmann did in her story Undinecarried out: “His Undine wants to break the curse, determine her own fate, no longer have to murder, but can go and love again. She no longer wants to be phantasm, i.e. object, but finally to become subject. (...) The fact that anyone who wants to can read the plot from a socio-political perspective corresponds to Petzold's cinematic realism and his weakness for stories about women. " 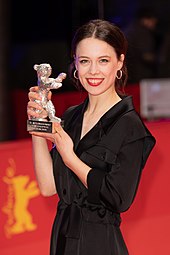 Paula Beer with the Silver Bear she won

Christian Petzold competed with Undine for the fifth time after 2005 , 2007 , 2012 and 2018 for the Golden Bear , the main prize of the festival. Leading actress Paula Beer won the Silver Bear for best actress . In addition, the film was awarded the FIPRESCI Prize .

Even before its release, Undine also received a nomination for the Fair Film Award 2020 in the feature film category , but was left behind in the Polizeiruf-110 episode Holy should you be . At the presentation of the German Film Prize 2020 , nominations in the categories of Best Fiction Film and Best Sound Design ( Andreas Mücke-Niesytka , Martin Steyer , Dominik Schleier , Benjamin Hörbe , Bettina Böhler ) followed. In addition, Beer received the European Film Award 2020 for Best Actress, while the film received a nomination.