This article is about the romantic poet. For his son, the Prussian major general, see Friedrich de la Motte-Fouqué (major general) . 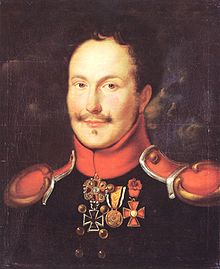 Friedrich de la Motte-Fouqué (painting by an unknown artist, around 1815)

Friedrich de la Motte-Fouqué (copper engraving by F. Fleischmann after a drawing by W. Hensel , around 1820)

Friedrich Heinrich Karl Baron de la Motte Fouqué (full name: Friedrich Heinrich Karl Baron de la Motte Fouqué, Baron de Thonnayboutonne, Baron de Saint-Surin, Seigneur de la Greve ) comes from a noble French Huguenot family from Brandenburg an der Havel. His godfather was Frederick the Great . He spent his childhood on his parents' estate in Sacrow near Potsdam , and later on Lentzke near Fehrbellin . Fouqué was brought up by changing private tutors (including Dietrich Arnold Friedrich Sachse and August Ludwig Hülsen ). Determined by his grandfather, Heinrich August de la Motte Fouqué (1698–1774) (General of the Prussian Army under Frederick II ), he joined the Prussian army at a very early age. At seventeen he already held the rank of ensign and took part in the Rhine campaign of 1794. He then served as a lieutenant in the cuirassier regiment of the Duke of Weimar in Aschersleben .

From 1798 he was married to Marianne von Schubaert, from whom he divorced in 1802. In the same year he resigned from the army.

During his time in Weimar he had encounters with Goethe , Schiller and Herder . In 1803 he married the landowner Caroline von Rochow , born Caroline Philippine von Briest, who was two years his senior . Fouqué and his wife lived at Nennhausen Castle near Rathenow . Both were active as a writer. Fouqué initially published under the pseudonym Pellegrin . Fouqué's sponsor was August Wilhelm Schlegel , who published his Dramatic Games (1804).

This was followed by the romances from Thale Ronceval (1805), the novel History of the noble knight Galmy and a beautiful duchess from Brittany (1806), the novel Alwin (1808) and the heroic game Sigurd, the snake slayer (1808) - works that are in fabric , poetic conception and manner of representation already marked his later poetry. The war legends of the north and the French knight stories of the Middle Ages merged into a fantastic world.

Highlights of literary creation, return to the military

Between 1808 and 1820, Fouqué's life and poetry took off most. In 1811, Undine appeared in Berlin , a story interspersed with fantastic elements, partly in fairytale tones. This was followed by the chivalric novel The Magic Ring (Nuremberg 1812). In the same year, Fouqué's patriotism led him back to the Prussian army. He took part in the battles of the war of liberation as a lieutenant and cavalry master with the volunteer hunters , received his farewell as a major in 1815 and then lived again at Gut Nennhausen.

In 1818 Johann Leonhard Schrag published the two volumes Altsächsischer Bildersaal in Nuremberg , with a preface from 1817, including the dramas Herrmann, a heroic play in four adventures (412 pages) and (Volume II) Welleda and Ganna - An Old German Story (25 chapters on 688 Pages, with a privilege foreword by the royal Württemberg government, Freiherr von Holzschuher, Stuttgart 1817 and Carlsruhe 1818).

He also belonged to the circle of Serapion brothers around ETA Hoffmann.

Tomb in the old garrison cemetery in Berlin-Mitte 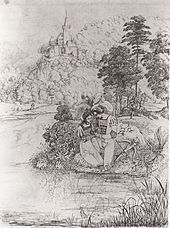 In 1818 Fouqué suffered a stroke . Then the stories Bertrand du Guesclin (Leipzig 1821), Knight Elidouc, Old Brittany Sage (Leipzig 1823), The Saga of Gunlaugar, called Dragon's Tongue, and Rafn the Skald appeared. An Icelandic customer in the 9th century (Vienna 1826), Jakob Böhme, a biographical memorial stone (Greiz 1831).
On friendship with Ernst von Rüchel , he wrote a two-volume biography (Berlin 1826) after his death, it was largely based on information from his adjutant and friend Johann von Brixen .
In 1831 his wife Caroline died. In 1833 he married the writer Albertine de La Motte Fouqué , who later published his estate, and lived in Halle (Saale) . This was followed by the empires at the beginning of the year 1835-40, seals (Hall 1835-40, 6 issues), Prussian mourning slogans and homage greetings for 1840 (Hall 1840). In 1841 he returned to Berlin and published the Selected Works, final edition (in twelve volumes). Even before his death, Der Pappenheimer Kürassier followed, scenes from the time of the Thirty Years War (Nordhausen 1842). He published (in community with Ludwig von Alvensleben ) the newspaper for the German nobility (Leipzig 1840–42).

Fouqué died in Berlin on January 23, 1843. His grave is in the old garrison cemetery in Berlin-Mitte , Kleine Rosenthaler Straße and Linienstraße.

The hometown of Brandenburg an der Havel honored its poet by naming the city library Fouqué Library on January 23, 1998.

The best known is still the Undine . His work experienced a revival and a series of new editions and reprints through the biography of Arno Schmidt : Fouqué and some of his contemporaries (1958).

The literary legacy of Friedrich de la Motte Fouqué is also cultivated in the Kleist Museum in Frankfurt (Oder).

Publications during his lifetime (selection)