The Kino International is a large-capacity cinema on Karl-Marx-Allee 33 in Berlin , operated by the Yorck Kinogruppe and located between Alexanderplatz and Strausberger Platz . It was opened in 1963 and served as a premiere cinema in the GDR until 1990. As a testimony to the architectural Modern cinema is since the beginning of the 21st century under monument protection . Due to its light and airy functionality, it differs fundamentally from the buildings on Karl-Marx-Allee that were completed in the 1950s.

After the completion of the then Stalinallee from Strausberger Platz to Proskauer Straße, the extension to Alexanderplatz was also planned. After a proposal by Hermann Henselmann was rejected , a design competition was launched, in which seven architectural firms took part. Unlike in the first phase of construction, in which houses in the lavish style of socialist classicism dominate, the jury decided in favor of the second phase of construction for reasons of cost, among other things, in favor of the design by city planners Josef Kaiser , Edmund Collein and Werner Dutschke , which was a mixed development of prefabricated buildings and shops , Restaurants and cultural institutions. These include u. a. the Café Moskau , the Mocha Milk Ice Bar , the Hotel Berolina and the Kino International . As an integral part of a residential complex with the same "functional density (it was not to be found in any other inner-city development area of ​​those years") in the GDR. This urban composition could easily withstand world standards. 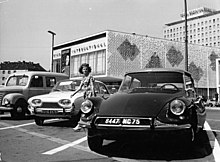 The cinema building itself was planned by the architects Josef Kaiser and Heinz Aust as a three-storey reinforced concrete skeleton structure clad with light-colored sandstone . Kaiser had previously designed the Kosmos cinema and the Moscow café . Due to the upstream bar area, the floor plan dimensions of the floors are different, namely 38 meters × 35 meters on the ground floor and 47 meters × 35 meters on the upper floor. The cinema hall with its spacious foyer cantilevered nine meters over the ground floor. An area open to the street with a large glass surface is characteristic. The equal treatment of the floor and wall surfaces on the covered forecourt below the foyer and the transparency of the entrance area characterize the building as an “open house”.

The three windowless side surfaces take up a moving sculptor's relief entitled From the Lives of Today's People . The 14-part work consists of stone cast and was designed by Waldemar Grzimek , Hubert Schiefelbein and Karl-Heinz Schamal from just two molds.

After two years of construction, the cinema was ceremoniously opened on November 15, 1963 in the presence of State Council Chairman Walter Ulbricht with the Soviet 70mm film Optimistic Tragedy . In addition to the actual cinema hall with originally 608 (today: 551) seats, there were numerous other rooms, including a "representation room" in the basement where the state and party leadership stayed before and after the premiere celebrations, a library and an office for the October Club . The movie theater was also frequently used for concerts of national rock music and international concerts, like John Mayall , among many others .

The Klub International youth club was located on the top floor until around 1990 and was accessible through the entrance on the right-hand side of the facade. In addition to other events, important concerts such as Feeling B or Bayon took place here. Following on from this name, the premises of the Kinos International have been used for regular gay and lesbian parties since the late 1990s .

Especially in the 1950s and 1960s, numerous buildings in Berlin were designed with a special cinema architecture, such as the Zoo Palast and the Royal Palast in West Berlin . The construction should offer the cinema visitor a maximum visual and sound experience. This was also taken into account in the planning of the cinema hall in the International Film Theater . The cinema, which is designed for 608 visitors, is sloping and is located on the low basement level with the ticket office and cloakroom. The width of the canvas is a generous 17.5 meters. Only the Zoo Palast in Berlin offers something comparable today. It was also about a cultural reassessment of the cinema, resp. Film palace in the GDR.

The sound technology was specially designed for the cinema hall and is similar to that of a recording studio. The walls, which are provided with insulating mats, and the elegant wall cladding above them, made of rhythmically offset, inclined wooden strips with open joints, guarantee acoustics that were unique for the time . In addition to creating a visual effect, the wave-shaped ceiling has the task of optimally carrying the sound into the cinema hall. In the 1980s, Kino International was also one of the few cinemas in the GDR to be equipped with a Dolby stereo system. The design, choice of materials and proportions make this room one of the most successful movie theaters of the post-war period .

Two of the last film projectors from GDR production are still in the projection room. They also allow 70 mm copies to be played. The production of the projectors was soon within the Comecon in Czechoslovakia laid.

After 1990 the cinema was rebuilt and the seating was changed.

The inviting foyer on the upper floor has panoramic windows with slim golden frames facing Karl-Marx-Allee. Their arrangement symbolizes the proportions of a classic column facade. In the center of the entrance area there is a ring-shaped seating area upholstered in black leather. The four crystal chandeliers come from glass workshops in Czechoslovakia. Finally, a spacious bar awaits visitors in this area.

Premiere curtain made of glitter textiles

The Kino International served as a premiere cinema in the GDR until 1990. Numerous DEFA films premiered here. Especially for the party and state leadership, the eighth row, in which one had an optimal view, was provided with special legroom. Before and after the premieres, the visitors to the state tour stayed in the “Representation Room ” (today: Honecker Lounge). A nuclear bunker with a few people capacity was installed in the basement for the government, and an elevator was installed inside the building .

In the 21st century, the International is once again used by numerous filmmakers as a premiere cinema due to its ambience and continues to be a venue for the Berlinale . It is popular with Berlin moviegoers as a cinema with tradition and a special atmosphere. The huge film posters of the movie of the week on the outside of the International are manually from movie posters painters of the studio Advertising Werner from Reinickendorf drawn and are a real eye-catcher.