The Zoo Palast is a cinema in the western center of Berlin in the district of Charlottenburg . The cinema in Hardenbergstrasse currently belongs to Premium Entertainment GmbH. The company was rebuilt and reopened on November 27, 2013.

The exhibition halls at the zoo , in which the first Berlin six-day race was held in 1909 , stood in the same place . A cinema was then built there, in which films were shown as early as 1915 and which was originally called the “ Palace Theater at the Zoo ”. In 1925, the Palace Theater at the Zoo was taken over by the UFA and converted. A large part of German film works premiered here. B. Metropolis in 1927. The cinema had its own orchestra, ballet and cinema organ . During the National Socialist era , the palace theater at the zoo was to be comprehensively designed by Albert Speerbe rebuilt; however, these modifications never took place.

During the Second World War , the Palace Theater at the Zoo was almost completely destroyed in an air raid in 1943 and finally demolished in 1955. Today's Zoo Palast was built in 1956/1957 according to plans by the architects Paul Schwebes , Hans Schoszberger and Gerhard Fritsche . Originally the Zoo Palast only had two halls (Hall I with 1070 seats and Hall II with 550 seats - today Cinema 4). As a result of numerous renovations and extensions in the 1970s and 1980s, the Zoo Palast was recently expanded to nine halls with a total of 2,758 seats. The space available in the first two halls was retained. The most distinctive feature of the Zoo Palast is the slightly outwardly curved facade clad with light yellow ceramic panels, to which large film advertisements were always attached, which were painted by hand especially for this purpose. The facade is now a listed building .

From 1957 to 1999 the Zoo Palast was the central competition cinema of the Berlinale . After that, the Zoo Palast only occasionally hosted premieres.

Closure, renovation and reopening in 2013 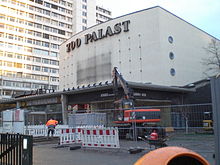 The traditional Zoo Palast Berlin closed its doors on December 29, 2010. According to press reports, the lease with the owner of the site expired. The building has undergone a major redesign. The renovation of the two listed halls on the first and second floors and the construction of five more halls were carried out. The Zoo Palast was reopened in this form on November 27, 2013 and now has a capacity of around 1700 seats. Since 2014 it has also served as the venue for the Berlinale again. The former CinemaxX founder Hans-Joachim Flebbe is the new operator .