The title of this article is ambiguous. Further meanings are listed under BZ . 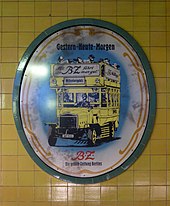 BZ is a tabloid from Berlin that appears in BZ Ullstein GmbH , a wholly-owned subsidiary of Axel Springer SE . It is currently the local newspaper with the highest circulation in Berlin , but has suffered high circulation losses in recent years. The sold circulation is 82,572 copies, a decrease of 34.1 percent since 2013.

The BZ should not be confused with the Berliner Zeitung, which has been published since 1945, and the tabloid BZ am Abend (now Berliner Kurier ), which was also published in the GDR .

When it was founded on October 1, 1877, the paper was called Berliner Zeitung , abbreviated as BZ 1878, it was bought by Leopold Ullstein . In 1904 it was restructured to become BZ am Mittag - and made it clear that it was a daily newspaper. After the suspension in the Second World War and the return of the Ullstein property expropriated during the Nazi regime , the BZ reappeared for the first time on November 19, 1953. Since the takeover of the Ullstein publishing house in 1960, it has - like the Bild-Zeitung and Die Welt  - to be counted among the newspapers of the Axel Springer group and also supports their political line.

On November 9, 2006, the publisher announced that it would spin off the newspaper into its own company, BZ Ullstein GmbH. This should make it more profitable in the highly competitive Berlin market. Associated with the spin-off was the move of the editorial team in February 2007 from the Axel Springer high-rise in Kreuzberg to Kurfürstendamm in the Neue Kranzler Eck in Charlottenburg . The sports BZ , which was launched for the 2006 World Cup and had been sold with a circulation of 50,000 since August 2006 , was discontinued on December 22, 2006. From 2006 to 2016, the former wrote pace - Text boss Uwe head the column TV head of the day .

In July 2013, the Springer Group announced the merging of the editorial offices of BZ and the Berlin edition of Bild as part of a reorganization of its print division . Both titles should, however, retain their independence - both in print and online. As a result, BZ exchanged premises with Springer's sister paper Berliner Morgenpost (Mopo) in November 2013: BZ moved back to the Axel Springer high-rise, Mopo took over BZ's previous premises in the Neue Kranzler Eck.

The BZ is one of the German daily newspapers with the greatest loss of circulation in recent years.

The circulation sold fell by 54 percent from 1998 to the end of 2012. At the last report to the IVW it was 135,873 copies. This corresponds to a decrease of 159,046 units. Then the newspaper changed the reporting of the circulation figures to the IVW to the period from Monday to Saturday.

The number of copies sold has fallen by an average of 5.6% per year since 2013. In contrast, last year it rose by 6.4%. It is currently 82,572 copies. The share of subscriptions in the circulation sold is 18 percent.

The number of copies sold has fallen by an average of 5.7% per year over the past 10 years. In the past year, however, it rose by 14.4%. It currently amounts to copies.

Since 1991, the newspaper has been awarding an annual culture prize, the Berlin Bear .

Together with Berlin experts for voluntary work, the BZ founded the social network of "Berlin Heroes" in October 2009. “Anyone who wants to help should find out through the“ Berliner Helden ”campaign where they are needed and where their help can best be used.” On the website www.berliner-helden.com and daily in the BZ , the so-called Activities to participate, presented - from help with homework or renovating a lounge to collecting rubbish in the forest or building a playground.