The acoustics (of Greek ἀκούειν (pronounced "akuein"), hear 'or akoustikós , hearing regarding') is the science of sound and its propagation. The field of science contains a multitude of related aspects, such as the origin and generation, the propagation, the influencing and the analysis of sound, its perception by the ear and the effect on humans and animals. Acoustics is an interdisciplinary subject that builds on knowledge from numerous specialist areas, including physics , psychology , communications engineering and materials science . Acoustics are also (fuzzy) divided into three sub-areas:

The introduction of tone systems and moods in music in the 3rd millennium BC is considered to be the first systematic concern with acoustics . In China . From Western antiquity, a scientific study of acoustics has been handed down by, among others, Pythagoras of Samos (approx. 570-510 BC), who mathematically analyzed the relationship between string length and pitch in the monochord , some of which were ascribed to him, such as Pythagoras in the forge , but are more of a legend. Chrysippos of Soli (281–208 BC) recognized the wave character of sound by comparing it with waves on the surface of the water. The Roman architect Vitruvius (approx. 80-10 BC) analyzed the propagation of sound in amphitheatres and suspected the propagation of sound as a spherical wave . He also described the mode of action of Helmholtz resonators for the absorption of low-frequency sound.

Helmholtz resonator made of brass from around 1900

Leonardo da Vinci (1452–1519) recognized, among other things, that air is necessary as a medium for sound to propagate and that sound propagates at a finite speed. By Marin Mersenne (1588-1648), among other scientific findings on the nature of sound and the first indication originates an experimentally determined speed of sound . Galileo Galilei (1564–1642) described the relationship between pitch and frequency, which is important for acoustics . Joseph Sauveur (1653–1716) introduced the term "acoustics" for the theory of sound. Isaac Newton (1643–1727) was the first to calculate the speed of sound on the basis of theoretical considerations, while Leonhard Euler (1707–1783) found a wave equation for sound in the form used today. Ernst Florens Friedrich Chladni (1756–1827) is considered the founder of modern experimental acoustics; he found the Chladnian sound figures , which make natural vibrations of plates visible.

At the beginning of the 19th century there was intensive study of acoustics and numerous scientists devoted themselves to the topic. For example, Pierre-Simon Laplace (1749–1827) found the adiabatic behavior of sound, Georg Simon Ohm (1789–1854) postulated the ability of the hearing to break down sounds into fundamental tones and harmonics, and Hermann von Helmholtz (1821–1894) researched tone perception described the Helmholtz resonator and John William Strutt, 3rd Baron Rayleigh (1842–1919) published the "Theory of Sound" with numerous mathematically based findings relating to sound, its origin and propagation.

In the second half of the 19th century first acoustic measurement and recording devices are developed, the Phonautograph by Édouard-Léon Scott de Martinville (1817-1897) and later the phonograph by Thomas Alva Edison (1847-1931). August Kundt (1839–1894) developed the Kundt tube and used it to measure the degree of sound absorption .

From the beginning of the 20th century, the existing theoretical knowledge on acoustics was widely used. This is how the scientific room acoustics , founded by Wallace Clement Sabine , developed with the aim of improving the audibility of rooms. The invention of the electron tube in 1907 enabled the widespread use of electroacoustic transmission technology. Paul Langevin (1872–1946) used ultrasound for the technical location of objects under water ( sonar ). Heinrich Barkhausen (1881–1956) invented the first device for measuring volume . Scientific journals have been published since around 1930 that are exclusively devoted to topics related to acoustics.

One of the most important applications of acoustics in the first half of the 20th century was the reduction of noise , for example the silencer for the exhaust system of motor vehicles was continuously improved. With the introduction of jet engines around 1950 and the noise reduction necessary for successful use, aeroacoustics developed , which was essentially founded by the work of Michael James Lighthill (1924–1998). 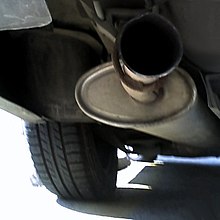 Exhaust silencer on a car

A large number of different aspects are dealt with within acoustics:

In addition to the consideration of time-averaged sound field and sound energy quantities , the deflection over time is often measured, e.g. B. the pressure signal, and subjected to a frequency analysis. For the relationship between the frequency spectrum obtained in this way and the sound, see sound spectrum . The temporal change within a sound event is accessible through short-term Fourier transformation . The changes in the spectrum during the process of sound emission, propagation and measurement or perception are described by the respective frequency response . Frequency weighting curves take into account the frequency response of hearing .

In order analysis, noises or vibrations from rotating machines are analyzed. In contrast to frequency analysis, the energy content of the noise is not plotted against the frequency, but against the order. The order corresponds to a multiple of the speed.

An anechoic room , sometimes incorrectly called an "anechoic" room, has absorption material on the ceiling and walls so that only minimal reflections occur and conditions as in a direct field D (free field or free sound field) prevail, with the sound pressure being 1 / r the distance law decreases from a point source of sound. Such rooms are suitable for voice recordings and for the localization of sound sources. If the sound intensity passing perpendicularly through this surface is measured on an imaginary envelope around the sound source , the sound power of the source can be determined.

A free-field room is the special design of an anechoic room. Here, however, the floor is also covered with absorbent material. Since the floor can no longer be walked on as a result of this measure, a sound-permeable grille is usually placed over it, which enables access to the measurement object. Such rooms are used in acoustic measurement technology in order to be able to carry out targeted sound source analyzes - also under the measurement object.

Hall of the TU Dresden

Most higher animals have a sense of hearing . Sound is an important communication channel because it has a practically immediate effect at a distance . With vocalizations, the animals are given a means of marking their territory , searching for partners or packs , finding prey and communicating moods, warning signals , etc. The human hearing range lies between the hearing threshold and the pain threshold (approx. 0 dB HL to 110 dB HL).

When generating sounds in the context of phonology, a distinction is generally made between voiced and unvoiced phonemes . With the voiced phonemes, which are known as vowels , the “raw” sounds are generated in the larynx by vibration of the vocal cords , which are then modulated in the pharynx and nasal cavity by various arbitrarily influenceable or unchangeable individual-specific resonance spaces. With voiceless phonemes, the consonants , the vocal cords are at rest, the sound being created by modulating the air flow. In whispering , even the vowels are formed only by modulating the spectrum of the noise of a forced air stream, with the vocal cords resting.

Acoustics professionals are referred to as acousticians or acoustic engineers. The English job titles are acoustical engineer or acoustician. The usual approach to this field of work is a degree in physics or a corresponding degree in engineering. Hearing aid acousticians work in the field of medical technology and use both physical and medical expertise in their profession.