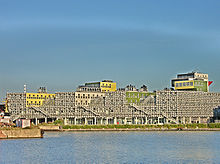 The Alfred Wegener Institute Helmholtz Center for Polar and Marine Research (Alfred Wegener Institute - AWI) is an internationally recognized research institute in Bremerhaven that specializes in research into the polar regions and the seas surrounding them. As one of the few scientific institutions in the world, it deals with both the Arctic and the Antarctic . It has a coordinating role in German polar research and also deals with the North Sea and the German coastal regions. Due to its scientific equipment, it is able to include many areas of the earth system in its research, from the earth's atmosphere to the ocean floor . The global climate is increasingly becoming the focus of scientific research. The institute was founded in 1980 as a foundation under public law and is a member of the Helmholtz Association of German Research Centers . Today around 1000 employees work at four locations. The institute is named after the German polar researcher and geoscientist Alfred Wegener . The budget is 140 million euros (2018).

The exploration of the polar regions, their geological composition, structure and classification into the earth's history using seismology and seismics are just as much a subject of research as climate research , marine biology and marine geology .

To this end, the institute conducts marine and polar scientific research in the Arctic , Antarctic and also in moderate latitudes. The Dallmann laboratory and the Kohnen station are located in the Antarctic , where ice drilling was carried out in the summer as part of the international EPICA project. The oldest ice found to date is around 900,000 years old. In Ny-Ålesund on Spitsbergen , the AWI maintains the AWIPEV research base together with the French polar research institute, consisting of the German Koldewey station and the French Rabot station . Since 1998, the institute has been using the Samoylov Island research station in the Russian Arctic for its permafrost research together with Russian partners . The Neumayer Station II on the polar southern continent of Antarctica was a year-round research station with the research areas of geophysics, meteorology and atmospheric chemistry. It consists of two parallel steel tubes (approx. 100 meters long with a diameter of eight meters) in which heated (residential/work) containers are lined up. The tubes are buried in the top ten meters of a 200 meter thick ice shelf. The icebreaker Polarstern , commissioned in 1982 , supplies the stations and is itself a floating research laboratory. The institute has been in charge of the World Radiation Monitoring Center since June 2008 . Neumayer Station III has been in operation since February 20, 2009 as the successor to Neumayer Station II.

The Department of Geosciences (Bremerhaven, Potsdam and Sylt) investigates how the Earth's processes have shaped the development of the climate. For this purpose, the sediment structure of the oceans is examined as well as terrestrial deposits in the ice caps of the poles. The composition and distribution of marine sediments , the material and energy flows in permafrost areas and the structure and changes in the earth's crust and the polar ice sheets are researched .

The Department of Biosciences deals with ecological, physiological and ecotoxicological issues. The AWI concentrates on the polar regions as well as the shelf and coastal regions of the North Sea. In addition to research on cold-water corals , investigations on tropical coral reefs have also been carried out in recent years . Central themes include the responses of cells, organisms, populations and communities to external influences and the organization and dynamics of populations, communities and ecosystems. The life sciences at AWI therefore work on both the auto-ecological and macro-ecological levels .

In the Department of Climate Science, AWI investigates the physical and chemical processes in the ocean-ice-atmosphere system and their importance for global climate development. Working groups at the Alfred-Wegener-Institute and the research center in Potsdam deal with the regional and large-scale circulations in the system and the elucidation of physical and chemical processes in the atmosphere. These include the influence of clouds and sea ice on the energy exchange between the ocean and the atmosphere, the circulation of water masses in the polar regions, the study of natural climate changes and the modeling of atmospheric circulation in the Arctic , as well as experiments on geoengineering using iron fertilization .

In addition to the main building in Bremerhaven, the research institute also includes the biological institute on Helgoland and the Wadden Sea station in List on Sylt . A branch is located in the Albert Einstein Science Park on the Telegrafenberg in Potsdam .
Research ships are the Polarstern , the Heincke and the Mya II . The AWI also maintains two aircraft ( Polar 5 and Polar 6 ) of the Basler BT-67 type , a modified version of the Douglas DC-3 .
Research stations are Neumayer Station III in Antarctica (predecessor stations: Georg von Neumayer Station and Neumayer Station II ), the Franco-German AWIPEV research base ( Koldewey Station ) on Spitsbergen and the Russian-German Samoilov research base in Siberia Lena Delta .

The institute is 90 percent funded by the Federal Ministry of Education and Research. The state of Bremen , in which the AWI is based, finances 8 percent, the states of Brandenburg and Schleswig-Holstein each 1 percent. In 2012, the AWI had a budget of around 107 million euros, which increased to 140 million euros by 2019. 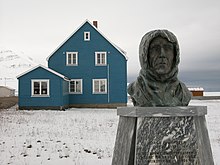 The institute's building in Ny-Ålesund, with a bust of Norwegian polar explorer Roald Amundsen

The research goal of the Biological Institute Heligoland is to examine the complex ecosystem in shallow seas and to understand the ecological interrelationships. Long-term ecological studies have been carried out since the 1960s and are now used to monitor and assess changes in the ecosystem over a long period of time. This regular inventory of plankton species can be used to identify changes in the ecosystem.

A second focus of the Heligoland Biological Institute is to work with local fishermen to increase the population of Heligoland lobsters by breeding and researching lobster larvae and young lobsters in the laboratory.

Another research focus are the marine natural substances , which are examined in close cooperation with industrial partners.

In the teaching project, students in the 10th-12th Year at grammar schools prepare for the Abitur over three years and research and experiment with subjects throughout the entire time. AWI scientists support the teaching of the part-time biology, chemistry, physics, mathematics and English teachers in the form of team teaching and ensure that the lessons are closely linked to ongoing projects at the institute. Twice a week, the Alfred-Wegener-Institute makes an extra part of the building available for classes with laboratories, classrooms and offices.

The duration of the teaching project is not limited in time and is evaluated externally by the University of Duisburg-Essen . In the initial phase, the project was funded by the Initiative and Networking Fund of the President of the Helmholtz Association of German Research Centers. In addition, the project was awarded the NaT Working Prize by the Robert Bosch Foundation in 2006.

Every HIGHSEA class goes on an expedition once during their time at the AWI. This includes the acquisition of sponsors and scientific trip planning with a research focus. So far, the expeditions have led to Spitsbergen, Greenland, Iceland and the sea mountains off Madeira. In order to cover the costs incurred, the association Sea Networks e. V. was founded by former HIGHSEA students. The aim of the association is to support upcoming HIGHSEA cohorts in their research trips. Among other things, a tall ship of the association should be available for this purpose.

The AWI was founded in 1980 as part of Germany's accession to the Antarctic Treaty . Initially, only a handful of people were employed, while today the AWI employs 920 researchers, technicians and administrative staff at the various locations. Gotthilf Hempel was the initiator and founding director . 11 years later, Hempel founded the Leibniz Center for Tropical Marine Ecology in Bremen. In many areas, the ZMT represents the tropical biological equivalent of the AWI.

The political background to the relatively good financial resources was the idea of ​​finding raw material resources in the polar regions in order to become independent of oil from the Middle East. However, the AWI quickly emancipated itself from this research goal and expanded its biological polar research. In 1985, even before climate change was a media topic, geophysicist Albrecht Müller was studying the effects of climate on Antarctica. In 1981 the first research station was set up in Antarctica.

In 1986 the then main building of the AWI was completed in Bremerhaven-Mitte near the old port according to plans by the architect Oswald Mathias Ungers . In 2004 the main location was relocated to the fishing port lock. The architect Otto Steidle designed the new building "Am Handelshafen".

On February 24, 1985, fighters from the Polisario Front shot down one of the Institute's research aircraft returning from Antarctica. When the Polar 3 was shot down in Western Sahara , the pilot Herbert Hampel, the co-pilot Richard Möbius and the mechanic Josef Schmid died.

The working group on oceanic acoustics at the AWI supported the production of the radio play In darkness let me dwell by the duo Merzouga (“ radio play of the month ” December 2016). It deals with the departure of the AWI research vessel Polarstern to Antarctica in 2016, the centenary of Ernest Shackleton 's failed endurance expedition , and intertwines the two events.