The station was built to study geophysics , meteorology and air chemistry and as a supply base for special summer expeditions. Since the construction of Neumayer II, the range of tasks had expanded considerably, in particular measuring the ozone in the atmosphere , examining the sea ​​ice and acoustic monitoring of marine mammals .

Neumayer Station II was manned all year round. In the Antarctic winter , a maximum of ten people lived here who were in contact with the outside world via radio, telephone and a dedicated Internet line during this time. These people included a doctor , a meteorologist , two geophysicists , an air chemist , a radio operator and electronics technician , an electrician , an engineer and a cook . In the summer months worked up to 50 people in the station.

Model of the station in the Deutsches Museum Bonn

The new construction of the station by March 1992 had become necessary mainly due to the ice and snow load. The station was made up of two round steel tubes around 90 meters long, in which the containers for the sleeping cabins, various laboratories, the kitchen, an infirmary and other special rooms were set up (including workshop, radio room, energy supply, snowmelt). A third, transverse tube of the same length contained the storage and waste containers and served as a parking space for the vehicles. A tunnel connected this complex with a large hall, which also served as a parking space for vehicles. From the winter of 2003/04, the library in the ice , a project by the artist Lutz Fritsch , also belonged to the Neumayer station. 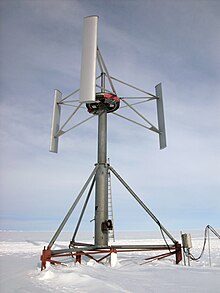 20 kW wind generator at the station

The station was supplied with electrical power by diesel generators with catalytic converters and oil collecting devices, which also ensured heating and snowmelt with the waste heat ( CHP principle) . There was also a wind power plant , which was the only one in Antarctica at the time and delivered up to 20 kilowatts .

The ice shelf on which the station was built is almost 200 meters thick and almost flat. A runway about 1000 meters long, which was approached by the Alfred Wegener Institute's Dornier Do 228 -101 , among others , was 300 meters away. The landing stage for the German supply ship Polarstern was eight kilometers away from the station. The next people lived on the South African SANAE-IV station about 225 kilometers to the southeast.

On the "28. International Antarctic Conference “At the end of July 2004 in Bremen , the federal government announced that a new station called Neumayer III would be built for 26 million euros. It was supposed to replace the previous station, as it became increasingly deformed by the snow load and the ice movements beyond 2007 and thus became uninhabitable. The new station was built above ground 6 kilometers south of Neumayer II and has hydraulic lifting devices with which the entire station can be raised to prevent it from sinking into fresh snow.

German research stations in the Antarctic and the Arctic